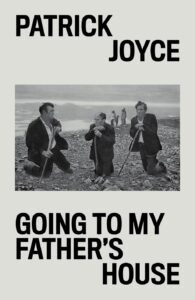 Patrick Joyce wrote Going To My Father’s House for his children to commemorate his parents and upbringing. As a historian, he chose not to write a memoir and left out real personal experiences and feelings. Instead, he put major family roots and whereabouts in the context of the transformation of a peasant society to an industrialized Ireland, emigration, and urbanization in Ireland en the United Kingdom. The book starts with unraveling the three men on the cover photo, linking them to Irish places, landscapes, language, and culture.

Next, the concept of belonging, calling a house your home, destruction of homes in World War II by both the Germans and the Allied forces are addressed, Religious conflicts, graveyards, the decline of industrial glory days in Manchester, Derry during the Troubles, and urban renewal are elaborated, interwoven with Joyce’s family. Our past formed our identity, but we can’t hold to the past. We live only in the here and now, shaping a future for the next generations. An inclusive society is what the author aims for. Accessible, yet thorough, personal at some level, conceptual and contextual at many others.

Patrick Joyce is an Emeritus Professor of History at the University of Manchester. He is a leading British social historian and has written and edited numerous books of social and political history, including The Rule of Freedom (2003), Material Powers (2010), and The State of Freedom (2013).

I received a free review copy from the publisher Penguin Random House through Edelweiss in exchange for my personal, unbiased opinion upon reading.