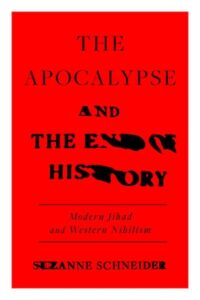 Historian Suzanne Schneider elaborates an interesting perspective on the rise and dispersion of the Islamic State (ISIS, Da’esh) in the light of neoliberalism in the western world, against which IS’s jihad is aimed. Where (world) wars are not fought anymore by nations against nations, we see civil wars, arbitrary boundaries fall apart and people from the same ethnic or religious backgrounds fight for their stakes.

Schneider sees parallels between modern jihad and the reactions to the neoliberal Western world like mass shootings, the storming of the Capitol in Washington D.C. in January 2021, xenophobia, and the rise of inspirational thinking during the COVID-19 pandemic. Schneider argues that modern jihad is not the antithesis of neoliberalism, but rather a dark reflection of its inner logic. The Apocalypse and the End of History is written with the sensibility of the lack of a single source of truth in Islam regarding the need for and format of a jihad. IS is not exemplary for all Muslims, especially not if it suppresses fellow Muslims in countries like Iraq, Syria, and nowadays African countries. Modern jihad and neoliberalism are indicators of politics of failure: the inability to imagine a better life here on earth, according to Schneider. Then, history doesn’t matter anymore and the only thing that counts is the here and now. A martyr’s death then is a practice of nihilism. The book offers a lot to ponder.

Suzanne Schneider is Deputy Director and Core Faculty at the Brooklyn Institute for Social Research, specializing in political theory and history of the modern Middle East. She is the author of Mandatory Separation: Religion, Education, and Mass Politics in Palestine, and her writing has appeared in Mother Jones, n+1, The Washington Post, and Foreign Policy, among other outlets.

I received a free advanced review copy from the publisher Penguin Random House through Edelweiss in exchange for my personal, unbiased opinion upon reading.