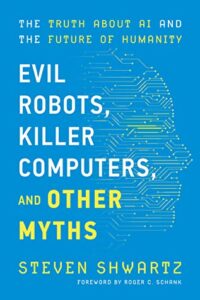 On the one hand, you can watch a multitude of documentaries, read books and articles on the rise of Artificial Intelligence (AI), robots replacing our jobs, and computers getting so intelligent that the human brain will lose its unique capabilities. On the other hand, we’re dealing with flaws in autonomous cars, chatbots, and automatic translation of difficult texts. Steven Schwartz, a veteran when it comes down to academic research and entrepreneurship in AI, presents a reality check in Evil Robots, Killer Computers, and Other Myths: The Truth About AI and the Future of Humanity.

He digs into the hype cycles around AI, the status quo of e.g. facial recognition, self-driving cars, industrial robots, machine translation, chatbots, deep fake video, audio, and messages. Despite the technological achievements, the prediction that it will take decades, centuries if not millennia to become on par with the human brain, still holds. We don’t have to fear Terminator-like scenarios or robots taking over all our jobs. AI is overrated in the short term, while abuse of technology, think of armed drones, surveillance cameras coupled with algorithms that determine who’s trusted and who’s not, coded bias and explicit racism built into the computer code is so serious, that you should be glad that legislators and public opinion do matter.

Despite a couple of periods disappeared from the radar screen, AI is here to stay. We’d better learn what facts and fiction is, and what to accept and what not regarding AI.

Steven Shwartz began his AI career working with Roger Schank as a postdoctoral researcher in the Yale University Artificial Intelligence Lab. Starting in the 1980s, Steve was a founder or co-founder of several AI companies, one of which created the award-winning Esperant business intelligence product. As the AI Winter of the 1990s set in, Steve transitioned into a career as a successful serial software entrepreneur and investor and created several companies that were either acquired or had public offerings.

I received a free review copy from the publisher via Netgalley in exchange for my personal, unbiased opinion upon reading.