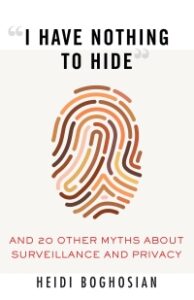 Heidi Boghosian in I have nothing to Hide and 20 other myths about surveillance and privacy has done her homework, explaining when and who did what to intrude our privacy, fill data lakes, and control society. Focusing on the United States, the 21 myths as Surveillance makes the nation safer, No one wants to spy on kids, Police don’t monitor social media, Congress and the courts protect us from surveillance, and There’s nothing I can do to stop surveillance are busted.

Boghosian doesn’t plea to withdraw entirely from the online and offline presence, rather than making educated decisions, continue raising concerns on abuse of data, sue parties when needed, and understand what data is being collected by who and for what reasons, which could be different from official statements.

Heidi Boghosian is an attorney and co-host of Law & Disorder Radio. She is executive director of the A.J. Muste Institute, a charitable foundation supporting activist organizations. She was previously executive director of the National Lawyers Guild. Boghosian has written numerous articles and reports on policing and activism and is the author of Spying on Democracy: Government Surveillance, Corporate Power, and Public Resistance. She received her JD from Temple Law School where she was editor in chief of the Temple Political & Civil Rights Law Review.

I received a free advanced review copy from the publisher Penguin Random House via Edelweiss in exchange for my personal, unbiased review upon reading.