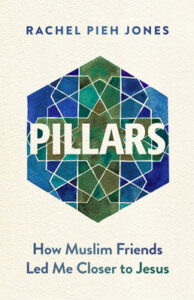 When Rachel Pieh and her husband Tom Jones moved from Minnesota to rural Somalia almost two decades ago, her safe and sound Baptist upbringing started to be challenged. Overwhelmed by new impressions, the urgent need to learn the Somali language, and being surrounded by Muslims only, Rachiel Pieh Jones quickly had to adapt and make choices. The presence of poverty, violence, weapons, but also faithful and fervent believers in Allah that wanted her to become one too.  While her husband had a job at a local university, she had to find her place raising their newborn twins, coping with all kinds of practicalities with the help of a local maid as well as with the high expectations on religious topics. After the murder of several foreigners, the Joneses resettle in nearby Djibouti, again in need to build new relationships and experiences the differences between countries in the Horn of Africa.

Pillars : How Muslim Friends Led Me Closer to Jesus takes the five pillars of Islam to reflect on Jones’ own belief system, understanding of who God is, and what her position towards fellow humans should be. Confession, prayer, fasting, tithing, pilgrimage, and the personal struggle to get forgiveness and stay free from sin are all addressed from a Muslim and Christian perspective. This original approach is highly personal, bridges gaps, and stirs sincere conversations with all imperfections, language blunders, and cultural bias. Is Islam really as evil, deceitful, and violent as portrayed back in the United States, especially among Evangelicals who maybe never met a single Muslim in their life?

Rachel Pieh Jones is the author of Stronger than Death. She has written for the New York Times, Christian Science Monitor, Huffington Post, Runners World, and Christianity Today. In 2003 she moved to Somaliland, and since 2004 she has lived in neighboring Djibouti, where she and her husband run a school.

I received a free review copy from the publisher, Plough, through Netgalley in exchange for my personal, unbiased opinion upon reading.