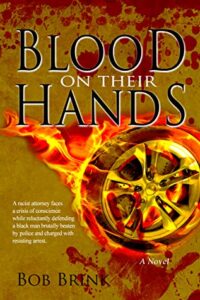 Alec Monceau is a young black man working to support his daughter’s family in Trinidad. His 2008 presidential campaign car bumper sticker to support Barack Obama triggers a violent beating by police officers, that happen to be racists and local Klu Klux Klan members.

In Blood on Their Hands, you follow Hiram Garbuncle, a veteran criminal defense attorney and alcoholic investigating this case ultimately putting his own life in danger. Bob Brink explains every single move in the jury selection, trial, and attempts by the offenders to escape their fate. It is a reason for me to be reading this crime fiction for hours without the feeling to have a fast-paced page-turner in my hands.

The changed opinion and behavior of former racists Garbuncle throughout time, the realistic slang and limited English uttered by Alex Monceau, and the fine mechanics of police officers’ side projects, compensate for this.

Bob Brink is a journalist who worked with the Palm Beach Post, The Associated Press in Chicago, Milwaukee Journal, Tampa Tribune, Joliet Herald-News, and Palm Beach Media Group (magazines). His byline has been on thousands of news stories, features, and entertainment reviews.
He has been a freelance writer for several years and now is embarked on writing novels.

Brink has won numerous writing accolades and several awards, including three for Palm Beach Illustrated, which won the Best Written Magazine award from the Florida Magazine Association after he became copy chief and writer. Besides dabbling in short-story writing over the years, Brink immersed himself in learning to play the clarinet and tenor saxophone. He performed many years with an estimable, 65-piece community symphonic band, and played a few professional big band gigs. He relegated music to the back seat after embarking on writing novels. A product of Michigan and Iowa, Brink has a bachelor’s degree in English from Drake University in Des Moines and completed graduate journalism studies at the University of Iowa, Iowa City.

I received a free review copy from the author in exchange for my personal, unbiased opinion upon reading.