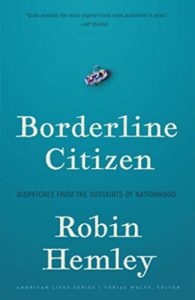 In Borderline Citizen Robin Hemley, a Jewish American with a Philippino wife takes his readers to the borderlines, enclaves, and odd places on this world. Modern nationhood sprang up in the late 1900’s, the border between India and Pakistan being drawn in just four weeks, and places like Baarle-Hertog and Baarle-Nassau here in the Netherlands and neighbouring Belgium only exist thanks to a historical treaty between two landlords.

What’s American or Canadian at Point Roberts, a pene-exclave near Vancouver? Would you rather be buried in a graveyard with Well-Known People, or rest under a nameless plate? And did you realize that many former Nazi era ministries and offices nowadays are….ministries and offices of the German government? Learn about the a Russian exclave on the Baltic Sea, Kaliningrad, formerly known as Königsberg. Hemley celebrates Guy Fawkes Day in the contested Falkland Islands. These few people are even more Brits than those in the northern hemisphere;. Handover Day among protesters in Hong Kong gives insights in the Chinese with a flavour of British and newfound self-confidence, and India Day along the most complicated border in the world teaches how fragile man-made distinctions are.

Borderline Citizen is part travelogue, part memoir, part reportage, part history with an appeal to belonging to a nation, people, or group in general, wherever the location.

Robin Hemley is the author of numerous books, including Invented Eden; Reply All: Stories; A Field Guide for Immersion Writing; Nola; Turning Life into Fiction; and Do-Over! He has won many awards for his writing, including a Guggenheim Fellowship and three Pushcart Prizes, as well as residencies at the Rockefeller Foundation’s Bellagio Center, the Bogliasco Foundation, the Fine Arts Work in Provincetown, the MacDowell Colony, and others.

I received a free review copy in advance from the publisher through Netgalley in exchange for my personal, unbiased opinion upon reading.