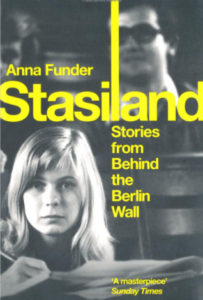 The release of the concept album Stasiland by London-based synth-pop band Ekkoes early 2020 triggered me to order and read the source of inspiration, Anna Funder‘s Stasiland – Stories from Behind the Berlin Wall (2003). The Australian-born journalist went to Berlin, put up a notice in a local newspaper to get into contact with former German Democratic Republic (GDR) inhabitants, Stasi officials, spies, and guards. The travels to suburbs, cities like Leipzig, Potsdam, and Nuremberg about Stasi men and Julia’s schoolgirl ordeal, kidnappings and babies left at the wrong side of the Wall (Thorsten), about Renft and Professor Mushroom in a denuded former student apartment, encounters in local bars, tours to former guard towers, tunnels, the infamous Bernauerstrasse and Normannenstrasse led to a retrospective of personal stories from Eastern Germany in all its raw aspects. Puzzle women trying to retrieve personal files out of 15,000 sacks of shredded documents, films, and photocopies, Stasi informers thankful that they weren’t hanged or sent to prison, and yet the Ostalgie, a memoir of a lost nation.

Anna Funder was born in Melbourne in 1966. She has worked as an international lawyer and a radio and television producer. Her book Stasiland: Stories from Behind the Berlin Wall, won the 2004 Samuel Johnson Prize. She lives in Sydney with her husband and family.