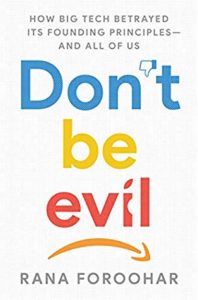 In the early days of Google, Don’t be evil, was the corporate mantra to live by. It is interesting to see that if a negative formulation like this is needed, the culture itself was already toxic. That’s the core message of the CNN analyst and Financial Times columnist Rana Foroohar in her book Don’t Be Evil: How Big Tech Betrayed Its Founding Principles — and All of Us. She focuses on Facebook, Amazon, Netflix and Google (FANG), It started as a counterculture movement of the sixties, with many entrepreneurs inspired by a vision of a future of technology enabling the world to become a better place. Think back of Linux, Wikipedia, and open-source software, and before that the mere joy of having a personal computer, later connected to the infant version of the internet.

The fundamental change to aim for profit maximization and become pure monopolists with a lot of negative effects like tax evasion, political influence, buying out or pushing away new market entrants, neglecting human rights, copyright, and privacy issues. The positive philosophies of the Big Tech companies proved to be superficial. Our personal data, online behavior is the raw material to be sold to the highest bidder. Relatively few new jobs have been created by the FANG corporations, productivity did not significantly increase because of the products and services these companies offer. And we, perceived as users of a free product, but in fact the providers of the capital, are left without any compensation for exorbitant profits the Big Tech can accumulate in the hands of a few very, very rich people, blocking real innovation and service to the world to be that better place, once founding fathers said to dream of.

Foroohar took lessons from the recent history of the past three decades, interviewed a lot of insiders, politicians worldwide, even worked for Google for a while, and investigated Uber as well. Have the Big Tech become too big to fail, like the system banks a decade ago? Is it possible to see one or more of the FANG topple and go bankrupt? Will this be a root cause of the next economic recession?  Finally,  In the last section, the author provides a plan to resist the FANG and enable innovation while also protecting us from the dark side of Big Tech.

Rana Foroohar is a Iranian-American assistant managing editor for Time magazine. In the past, she was an economics and foreign editor at Newsweek, where she had previously worked as a London-based correspondent covering Europe and the Middle East. For this reporting, she received the German Marshall Fund’s Peter R. Weitz Prize for transatlantic reporting.

I received a review copy from Random House through Edelweiss in exchange for my personal, unbiased opinion upon reading.