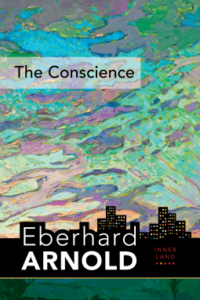 After having read and reviewed volume 1 of The Inner Life by Eberhard Arnold, I got offered volume 2, The Conscience. In this extensive Bible study meets thought exercise, Arnold explores the conscience as the part of our inner world, our soul and spirit that needs restoration through Jesus Christ’s atonement and indwelling of God’s Holy Spirit. Many have tried to empty their spirit, connect it to evil spirits, or become holy. The conscience is our moral compass with effects in daily life for good or bad results.

Directly exposing Adolf Hitler and his nazi regime, the author is clear about the single Leader one should follow. That bold statement resulted in a raid on his home and belongings one week after this volume was sent to Hitler. Arnold paid with his life, certain that everlasting life sanctified by the Lord would follow.

The Conscience is a call to action, emphasizing the importance of the worldwide Church, unified by God’s Spirit.

Eberhard was born in Königsberg, East Prussia into an academic family. He studied theology but, because of his views on infant baptism and his decision to leave the Lutheran church, he was refused his degree. He changed majors to philosophy. He married Emmy von Hollander and together they dedicated their lives in obedience to God’s will. This led to the beginning of community in 1920.

Eberhard was criticized for his uncompromising faith, which cost him many friends. Not wanting to form a separate sect, he always sought out others who felt as he did. This led to a year’s trip to North America (1930-31) to visit the Hutterites. He was accepted as a minister and the Bruderhof became part of the larger Hutterian movement.

When Hitler came to power in 1933 Eberhard spoke out clearly, recognizing early on the direction German politics were taking. He spent the last years of his life preparing the Brotherhood for possible persecution. Returning from a visit to government authorities in October 1933, he slipped and broke his leg—a complicated fracture which ultimately led to his death.

I received a free copy via Plough Publishing House through NetGalley in exchange for my personal, unbiased review upon reading.