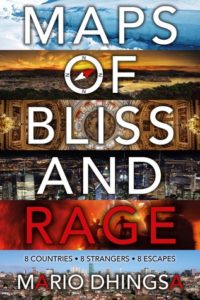 In Maps of Bliss and Rage, Mario Dgingsa, showcases eight short stories, each set in a different country, yet somehow dealing with the wish, opportunity or drive to escape. The social pressure of the international community at work in posts on Antartica, waiting to leave or get new provisions. Spies from Japan, South Korea, and North Kora trying to connect to the illegitimate princess of the Japanese Imperial Family. Or imagine Dr. Henry Kissinger meeting then U.S. president Nixon to discuss diplomatic skills in a New York restaurant in 1973. Other scenes are an Indian family where the pater familias tries to prevent an outrage against local Muslims. A Roman cemetery hosts a Chinese doctor’s wife, a Victorian Englishwoman, and an Iranian diplomat. And Malta, where Paul, the apostle, shipwrecked and hibernated, sees a peacemaking effort between a fiancée and a son’s widowed father. The final story with even a Dutch title (Tijd brengt rozen) and character (ms van Wijk) on her son’s tenth birthday. The stories are cleverly crafted.