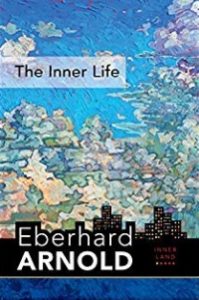 The 1936 Innen Land; Ein Wegweiser in die Seele der Bibel und in den Kampf um die Wirkklichkeit by Eberhard Arnold was not only a study into the what and how of the Christian everyday life, but also emphasized the importance to look for God’s Kingdom instead of longing for a Third Reich. When a copy of the book was sent to Adolf Hitler and his staff, they dismissed the call-to-repent and took Arnold prison. In 1975 the magnum opus of Eberhard Arnold, which was initially published as a patriotic pamphlet for German soldiers in 1914, evolved into the full book, was translated into English as The Inner Life: Inner Land: A Guide into the Heart of the Gospel, which now in 2019 sees a reprint and renewed introduction to the general public.

Christ calls us to deepen our inner life in stillness and quiet. He teaches us to pray, to spread the good news, and be full of the Holy Spirit. The illumination of our hearts by God will work out in our entire life, private and public. Arnold admires both God and his church as being the manifestation of God on Earth since Jesus’ ascension. The living church receives its unity and unanimity from the continual outpouring of the Spirit. The guide illustrates the topics with an overwhelming series of references to Bible versions. It’s a continuous flow of truths without slicing it into topics or sound bites. All human efforts toward salvation are doomed to fail. Human spirits unite in God’s Spirit. Understanding this may take a while, even a life, but it’s worth looking for!

Eberhard Arnold (1883-1935) studied theology, philosophy, and education at Breslau, Halle, and Erlangen, where he received his doctorate in 1909. He became a sought-after writer, lecturer, and speaker in his native Germany. Arnold was active in the student revival movement sweeping the country and became secretary of the German Christian Student Union. In 1916 he became literary director of the Furche Publishing House in Berlin and editor of its monthly periodical. Like thousands of young Europeans, Eberhard Arnold and his wife Emmy were disillusioned by the failure of the establishment – especially the churches – to provide answers to the problems facing society in the turbulent years following World War I. In 1920, out of a desire to put into practice the teachings of Jesus, the Arnolds and their five young children turned their backs on the privileges of middle-class life in Berlin and moved to the small German village of Sannerz. There, with a handful of like-minded seekers who drew inspiration from the Youth Movement, the sixteenth-century Anabaptists, and the early Christians, they founded an intentional community on the basis of the Sermon on the Mount. The community, which supported itself by agriculture and a small but vibrant publishing house, attracted thousands of visitors and eventually grew into the international communal movement known as the Bruderhof.

I received a review copy from Plough Publishing House via Edelweiss in exchange for my personal, unbiased opinion upon reading.