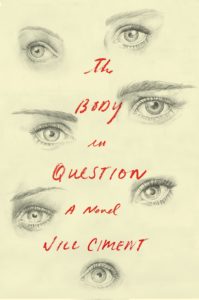 A novel from the perspective of two jurors in a murder trial is quite unusual. In The Body in Question, Jill Clement doesn’t shed that much light on the actual case at hand but focuses on Stephana a.k.a Hannah (C-2, a former photographer) and Graham Oliver (F-17, a 41-year-old anatomy professor), two members of a sequestered jury in central Florida. At least seven times the couple has sex during the trial’s days in the Econo-lodge where they stay overnight. Stephana considers humans as species rather than individuals and is willingly putting her marriage to her much older spouse at risk. And since the love affair between C-2 and F-17 doesn’t involve any discussion of the court case, the two think they’re not in danger. Sex merely as an act of two anonymous people, no strings attached. Body, soul, and emotions are separated. “When she looks up again, Graham is holding a cat. He never mentioned that he had a cat. Who took care of the cat while he was sequestered?” F-17 at some points wants more, but can’t get closer to C-2.

The plot twists every now and then, no further spoilers from my side. The novel is accessible, well-written, and fun to consume.

I received a free copy from Pantheon (Random House) through Edelweiss in exchange for my personal, unbiased review upon reading.