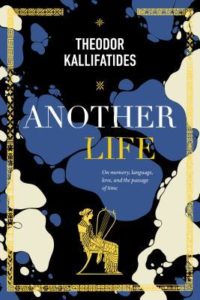 Theodor Kallifatides, a Greek immigrant who became a top-notch writer in Sweden suffers from a writer’s block. “Nobody should write after the age of seventy-five,” a friend recommends. Should you really stop writing? Would it be better to rediscover your mother tongue and start from there? There’s still so much to do in life. The recent economic crisis has hit Greece and its reputation. Isn’t it to easy to watch it from a safe distance up in Scandinavia? And what about Swedish society that’s rapidly changing.

Before the reader notices, Kallifatides continues, neglecting the writer’s block, sells is Stockholm studio and travels to Greece on a quest to rediscover language, love, life, economy, religion, and relationships in Europe. Another Life: On Memory, Language, Love, and the Passage of Time is honest, a well-written memoir, and provoking reflection on recent developments in this continent.

About the author
Theodor Kallifatides has published more than forty works of fiction, nonfiction, and poetry that have been translated around the world. Born in Greece in 1938, Kallifatides immigrated to Sweden in 1964 where he began his literary career. As a translator, he has brought August Strindberg and Ingmar Bergman to Greek readers, and Giannis Ritsos and Mikis Theodorakis to Swedish ones. He has received numerous awards for his work in both Greece and Sweden. He lives in Sweden.

I received a free review copy from the publisher Other Press via Edelweiss in exchange for my personal, unbiased review upon reading.