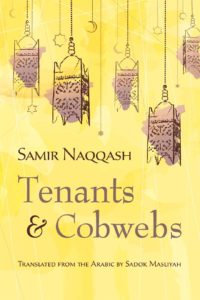 The Jews of Iraq are among the oldest organized communities in the Middle East. The majority of Iraqi Jews are direct descendants of those Judeans whom Nebuchadnezzar exiled from Judah to Babylon in 586 BCE. Samir Naqqash’s stirring novel Tenants and Cobwebs nostalgically commemorates the lost culture of an ancient Iraqi Jewish minority living amidst a majority Muslim population in 1940s Baghdad.

Naqqash writes in a mix of Arabic and local Jewish dialects. For Sadok Masliyah, the translator of the reviewed English version this was a major endeavor, but the result is stunning. The grand plot is Muslim-Jewish relationships impacted by the rise of Iraqi nationalism, an anti-Jewish sentiment fueled by Nazi propaganda: the Farûd, a bloody pogrom in 1941, and the founding of the Jewish state of Israel in 1948. The setting is an apartment house in Baghdad inhabited by Jews and Muslims. Close by the apartment house is a shack where a Muslim woman, ‘Atiyah, and her son Joudi live. Even as a child, Joudi is considered insane in the world of those who think themselves sane.

At first, the small circle of Jewish has a smooth life, where nothing special happens. The turbulence in their city and country deteriorates when repercussions of the war in Palestine affects their lives and relationships. Cordiality and peace are lost. The narrative has a stream of consciousness style, events are told through internal dialogues and conversations that don’t have a direct relationship with time and place. The 424 pages are certainly no easy read, many times I wondered what was actually happening and where this would lead to. Conversations can go on forever. The story unfolds in nonchronological, nonlinear fashion, confusing readers time and again.

With this consideration taken into account, Masliyah’s clever translation gives English-language readers access to one of the most imaginative and ambitious Middle Eastern authors of the twentieth century.

Samir Naqqash (1938-2004) was a Jewish Iraqi novelist, short-story writer, and playwright who emigrated from Iraq at the age of thirteen. Naqqash wrote in Arabic despite living most of his life in Israel. In 2004, he received the Israeli Prime Ministerial Award for Arabic Fiction. Sadok Masliyah was an assistant professor of Arabic and Hebrew at several American universities and the Defense Language Institute in Monterey, California. He has published studies on Arabic literature, Iraqi folklore, and spoken dialects, including his most recent book, The Formation of Quadrilateral Verbs in Iraqi Dialects.

I received a free review copy from the publisher Syracuse University Press through Edelweiss in exchange for my personal, unbiased opinion upon reading.