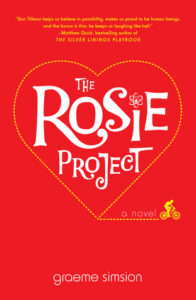 Don Tillman is a handsome thirty-nine old geneticist with a savant memory and a giant lack of social skills. Helped by Gene and Julia this highly autistic kicks off the Wife Project with a lengthy questionnaire for each candidate, who surely will fail to meet all the requirements that Don put on the ideal woman. Not aware of dating, abandon habits and strict schemes like a weekly meal roster, this The Big Bang Theory in overdrive mode dismisses countless candidates until Gene throws in a wildcard, Rosie Jarman, the one Don is absolutely not looking for. Rosie is looking for her biological father, and so The Father Project is born. A perfect track for a geneticist, although initiation in dealing with a woman also leads to transgress ethical and moral boundaries, putting his career and future in danger.

The Rosie Project is a powerful, funny and readable story of how love finds you and even the most insensitive men can turn into human beings capable of receiving and giving love. The Father Project and The Rosie Project have their twists, halts and ultimate happy endings.

Graeme Simsion is a former IT consultant and the author of two nonfiction books on database design who decided, at the age of fifty, to turn his hand to fiction. His first novel, The Rosie Project, was published in 2013 and translation rights have been sold in forty languages. Movie rights have been optioned to Sony Pictures. The movie is expected to be released in 2019. The sequel, The Rosie Effect, is also a bestseller, with total sales of the two novels approaching five million.
Graeme’s third novel was The Best of Adam Sharp, a story of a love affair re-kindled – and its consequences. Movie rights have been optioned by Vocab Films with Toni Collette attached to play the role of Adam’s great lost love, Angelina.

Graeme’s fourth novel, Two Steps Forward is a story of renewal set on the Camino de Santiago, written with his wife, Anne Buist, whose own books include Medea’s Curse, Dangerous to Knowand This I would Kill for. Movie rights have been optioned by Fox Searchlight with Ellen DeGeneris to produce.