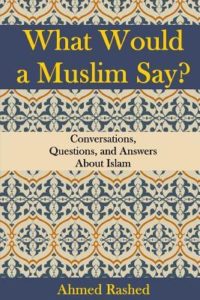 Ahmed Lotfy Rashed compiled one to one Q&A email treads triggered from WhyIslam.org from 2009 to 2011 for What Would a Muslim Say? Conversations, Questions, and Answers About Islam. Be aware that the book title suggests a black-and-white Q&A approach and Rashed uses this route frequently. Think of the comparable WWJD (What Would Jesus Do?) books and merchandise, popular in the U.S. two decades ago, as if for every question there’s a simple answer. In cases, the author gets confronted with objections, terrorist attacks with an Islamic motive I see attempts to escape. Suddenly, good and bad Muslims appear. Who’s to distinguish? Of course, you always count yourself to be on the good side. While attacks aren’t denied, readers are warned that condemnations from mainstream Islamic groups aren’t recorded or published in the (Western) media.

According to the author, there’s no compulsion of religion in Islam, only the ultimate fate of Muslims and other believers is different. There’s no persecution of Christians or other minorities, headscarves are worn voluntarily, Muslims seek no converts, and Sharia is never practiced in isolation. Well, it requires a giant leap of faith and bypassing many facts on the ground, not only in the past 1,500 years but also in the contemporary world. The real roots and meaning of distinction between state and religion are neglected. The answers lead to many more questions like the mixture of politics and religion e.g. Syria, Saudi-Arabia, Iraq, Iran, Taliban, IS(IS), and Turkey, the reasons for the huge number of refugees fleeing to Europe. And what about the mixture of local cultures and religion. Belgian journalist Jan Leyers showed the many faces of Islam when he traveled through eight countries for the tv series Allah in Europa. The text of Qur’an may be fixed and unaltered, interpretations for daily life are more fluid,

There’s no mention of the house of Islam, only a single reference to an Islamic state, and the consequences for non-Muslims. Jesus Christ in the Bible is very different from Isa in Qur’an, the God Christians and Muslims adore is not the same. The revelation of God as loving Father of his Son, the principles on sin, redemption, the unique role of Jesus Christ as the only way to the Father and the one to which all people will ultimately bow down (speaking of true Islam, surrender), is radically different from the simplified, and sometimes distorted versions of Jewish and Christian tenets presented in this Q&A. As the author himself recognizes, email is not an effective mean here. People can quit conversations at any point. Large parts of answers are repeated throughout the book, giving the impression of a copy-and-paste approach of instant answers, instead of an authentic two-way conversation digging into a specific question. I rather would have seen a more natural flow with in-depth research or reference. A book gives more room than a compilation of emails.

About the author
There are many questions, fears, and misconceptions about Islam and Muslims. I believe this book can answer questions, build bridges, and promote understanding. Since 2009, I have facilitated interfaith dialogues with many different people at www.whyislam.org. The conversations in these books are real. Some are curious, some are concerned, some are hostile, some are academic, and some are soul-searching. Additional information can be obtained from www.whatwouldamuslimsay.net.

I received a free review copy from the author in exchange for an unbiased, personal review upon reading.