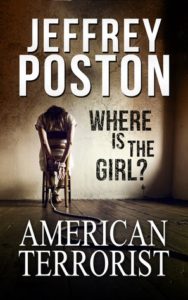 When the FBI is after the kidnapper of a high-profile girl, they think they have him. Carl Johnson, a black American without any criminal records, a model citizen, is caught and brought to an interrogation center at a secret location, where operators torture Johnson for eleven days to retrieve the location of the missing girl.

Carl Johnson, however, doesn’t break way beyond the points where other people would have in these circumstances. The impact of the torture and the FBI invoked shooting of his son Mark, is life-changing. Labeled as the American Terrorist, Johnson decides to take revenge on a multiple target mission. He knows that he hasn’t the resources (money, staff, weaponry, etc.) the FBI can rely on. In Where is the Girl?, the first instance of the book series American Terrorist, you will be angry and compassionate, smarter than the U.S. government employees stuck in a tunnel vision, and in favor of the one man against the rest heroic Carl Johnson. Jeffrey Poston mixes recent shootings, racial profiling with a lot of plot twists, narrow escapes, and very detailed descriptions of tortures, communications, and power play at the federal institutions, and the mental processes of the victim turned into an oppressor.

About the author
Jeffrey Poston is a #1 international bestselling author of the fast-paced adventure thriller series, American Terrorist. He has also received rave reviews of his Jason Peares historical western series. Blending traditional and revisionist historical research, his westerns have been praised as “fast-moving” (Kelton) and “exciting, page-turning” (Zollinger) and “among the best writers of westerns” (Biblio.com). Jeffrey has had diverse careers in laser engineering, project management and real estate development. He lives in Albuquerque, New Mexico.

I received a free copy of the book from the author in exchange for my personal, unbiased review.