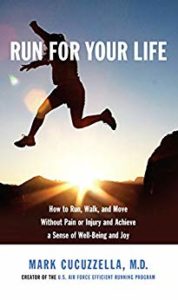 There many books on running healthier, faster, in a flow, the zone or other fantastic book title suggestions. Mark Cucuzzella – Run for Your Life: How to Run, Walk, and Move Without Pain or Injury and Achieve a Sense of Well-Being and Joy is the first running book I’ve read that actually digs into mechanics, has walking as a serious alternative, and is serious about exercises, food, and myth busting.

Cucuzzella has more than three decades of first-hand experience, runs a footwear shop, and was the creator of the USAF Efficient Running program. Although he says he’s no biologist and the book’s intended to be accessible, the chapters on tendons, muscles, organs were way too detailed for me. The drills (exercises) at the end of each chapter are illustrated by small black-and-white pictures. Reading from an ebook version would deserve larger graphics.

The author promotes bare-foot walking and running, recommends to have as lean shoes as possible that enable your feet to do the work they’re made for: interacting with the soil. The book has separate chapters for running during pregnancy, running as a child or as a senior. The large section with schedules, tips, book-internet links and an annotated list of videos to be watched online are a great added value.

Dr. Mark Cucuzzella, Air Force Reserve lieutenant colonel, practices family medicine in Ranson and Martinsburg, West Virginia. He is a professor at West Virginia University School of Medicine, and conducts Healthy Running Medical Education courses. He has run competitively for almost four decades, with more than one hundred marathon and ultramarathon finishes, and he continues to compete as a national-level Masters runner with an active streak of thirty straight years under a 3-hour marathon. Cucuzzella owns the first minimalist running and walking store, Two Rivers Treads, in his hometown. He has also been named a Distinguished Mountaineer by the governor of West Virginia, a Blue Ridge Outdoors Pioneer, Air Force Athlete of the Year, his home county’s Citizen of the Year, Boys and Girls Club of American Champion for Youth, and Colorado Academy of Family Physicians’ Teacher of the Year.

I received a free review copy from the publisher, , via Edelweiss+ in exchange for my personal, unbiased review upon review.