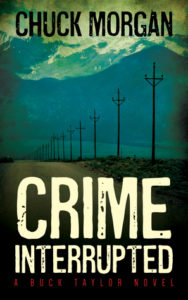 in Crime Interrupted, Chuck Morgan presents his audience an interesting crime story on a powerful and violent Mexican cartel trying to set up an operation in Durango, Colorado, a small town where normally nothing much happens. Money laundering, smuggling drugs, and human trafficking are executed successfully from a warehouse until a boy gets beaten and dumped nearby. It’s up to the local sheriff, supported by Senior Agent Buck Taylor from the Colorado Bureau of Investigation. He is the man for the job. He is talented, has a network in circles like the FBI, the DEA, and ICE, and a moral compass that motivates him to go for the extra mile, though missing his own children while on duty.

A massive raid on the warehouse is being prepared and executed. Unlike other thrillers, the narrative is sequential and descriptive. Morgan admits he is a storyteller, who lets his characters do the job. The author paints Buck Taylor as a real human, leaving enough open for a sequel to this storyline.

Chuck Morgan attended Seton Hall University and Regis College and spent thirty-five years as a construction project manager. He is an avid outdoorsman, an Eagle Scout, and a licensed private pilot with a passion for camping, hiking, mountain biking, and fly-fishing.

Morgan is the author of Her Name Was Jane, a memoir about his late wife’s nine-year battle with breast cancer. Morgan has three children, two grandchildren, and two dogs. He resides in Lone Tree, Colorado.

I received a free review copy from the publisher via Netgalley in exchange for my personal, unbiased review upon reading.