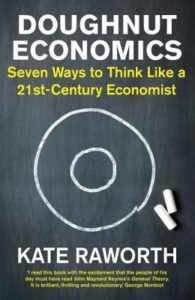 I am a master of science in economics myself and graduated in 1993. I was fed with insights of the famous economists like John Maynard Keynes, Milton Friedman, and Herbert Simon. Think of the homo economicus, an infinite and exponential growth of the GDP, market equilibrium, and a bandwagon every country should jump onto on the road to development. Enter the 21st Century with the Occupy movement, anti-globalists, cradle-to-cradle and sustainability, bounded growth and economies that are way more complex to manage than keeping an eye on the GDP, interest rates, and inflation.

Kate Raworth took the challenge to deconstruct the ideas of the past century and construct a new paradigm around a doughnut-shaped graphic in which multiple dimensions and factors influencing our economy have a place and need explanation and proof. In Doughnut Economics : Seven Ways to Think Like a 21st-Century Economist she takes her audience on an inspiring and for sure politics flavored tour de modern era economists, innovators, environmental savvy investors and world citizens like you and me in order to save the planet, still provide profitable business and make people happy.

Kate Raworth is a renegade economist focused on exploring the economic mindset needed to address the 21st century’s social and ecological challenges, and is the creator of the Doughnut of social and planetary boundaries.

Her internationally acclaimed idea of Doughnut Economics has been widely influential amongst sustainable development thinkers, progressive businesses and political activists, and she has presented it to audiences ranging from the UN General Assembly to the Occupy movement. Her book, Doughnut Economics: seven ways to think like a 21st century economist is being published in the UK and US in April 2017 and translated into Italian, German, Spanish, Portuguese, Dutch and Japanese.

Over the past 20 years, Kate’s career has taken her from working with micro-entrepreneurs in the villages of Zanzibar to co-authoring the Human Development Report for UNDP in New York, followed by a decade as Senior Researcher at Oxfam.