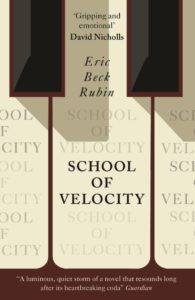 The debut novel by Eric Beck Rubin, School of Velocity, is based on the intertwined lives of two Dutchmen, Jan and Dirk. As a Dutch reader, it was fun to read an English novel with such familiar couleur locale. Jan de Vries discovers his musical talents at a young age, and works his way to a performing virtuoso classical music pianist through endless practicing, playing at venues all over the world, while struggling with noises in his head that shouldn’t be there. Dirk, his best friend in childhood years, has a different temperament. He steals Jan’s first girlfriend, teases Jan with explicit homosexual acts, and suddenly falls off the radar in pursuit of a career abroad.

Eventually, Jan finds a woman who he loves. She has to sacrifice a lot for the sake of Jan’s career. Who will win in the end? Dirk and Jan reuniting for a joint future? Will Jan succumb to the noises in his head, turn crazy and screw his career? What began as a play has become dead serious now. Apart from the minor flaws in the Dutch setting, this Canadian author’s debut really deserves your reading time. He provided an online soundtrack to School of Velocity for both main characters.

Eric Beck Rubin is a cultural historian who writes on architecture, literature and psychology, and this novel is his first foray into fiction. He is currently at work on a second: a family saga spanning several generations, from pre-World War II Germany to present-day Los Angeles and Western Canada. He lives in Toronto, Canada.

I received a free review copy from ONE / Pushkin Press via Edelweiss in exchange for my personal, unbiased review upon reading.