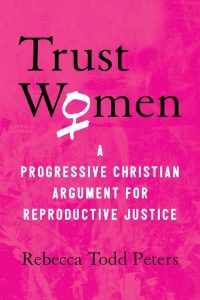 For a lot of Christians, it seems that abortion was invented in the second half of the 20th Century. The pro-life activists really primed hearts and minds with the pictures of unborn children en pressure to take responsibility and perceive pregnancy as a logical consequence of sexual activity…frames within a marriage of course. Presbyterian minister and ethicist Rebecca Todd Peters busts that myth by digging into ancient times of Persian, Egyptian, Greek, and Roman history to reveal the knowledge of abortion practices and contraceptives. Special attention is given to American history and the way women were stigmatized, paternalized, and abused. Statistics are brought in to clarify which small percentage of all abortions are triggered by rape or incest. Almost three-quarters of the women seeking an abortion in the United States do so for other than this or health issues of infant or mother. Though arguing that the Christian views on sexuality and abortion were the main driver, I’d precise it to a typically American cultural one, because I don’t recognize this from a European point of view.

The author touches upon the question whether an unborn child – prenate as she likes to call them – has the same moral status as the mother. Where does life begin? Is ending a pregnancy killing or a normal part of women’s reproductive lives: roughly one-third of US women will have an abortion by age forty-five, and fifty to sixty percent of the women who have abortions were using birth control during the month that they got pregnant. Yet women who have abortions are shamed and judged for their actions, and safe access to abortion is under relentless assault.

Abortion is not the problem. Trust women to act as capable, responsible moral agents is the mission Rebecca has.  Justification than becomes justice. Trust Women: A Moral Argument for Reproductive Justice addresses serious topics in a professional, provoking, well-thought manner. Hopefully, you don’t jump to conclusions before reaching the book’s end.

Rebecca Todd Peters is Professor of Religious Studies at Elon University. Her work as a feminist social ethicist is focused on globalization, economic, environmental, and reproductive justice. Her books include In Search of the Good Life: The Ethics of Globalization and Solidarity Ethics: Transformation in a Globalized World. Ordained in the Presbyterian Church (USA), she has been active denominationally and ecumenically for more than twenty-five years and currently represents the PC(USA) as a member of the Faith and Order Standing Commission of the World Council of Churches.

I received a free review copy from the publisher Beacon Press through Edelweiss in exchange for my personal, unbiased review upon reading.