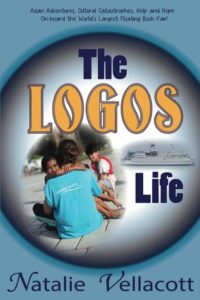 The British Sussex Police officer Natalie Vellacott took a two-year break and joined the Operation Mobilisation (OM) Christian missionary ship Logos Hope. It is one of the large ships sailing across the oceans to dock into harbors, receive thousands of visitors a day in their onboard bookshop, cafes. Volunteers staff the ship and all kinds of performing arts and teams reaching out to onshore locals, churches, and missionaries to share the Gospel of Jesus Christ. With hundreds of volunteers in their young adult or adolescence years, from sixty-five countries with different cultural backgrounds, proficiency of English and theological views, this mini-society faces many challenges. And that’s exactly where this partly coming of age, partly travelogue The Logos Life is about.

Natalie served in the International Cafe, acted as store-keeper of the largest floating book fair, went out to people living on a garbage dump, girls selling their bodies and addicted street teens in Asian countries like the Philippines, Hong Kong, Vietnam, Thailand, and Singapore. The reader gets a unique peek behind-the-scenes of the OM operations, ways to manage a dynamic and versatile volunteer organization, suppress romantic relationships, statistics of conversions and baptisms. It seems just as easy to lose your faith in God as well as enforce it. Natalie proves that you can deny divine signs and wonders happen in the here and now (officially called cessationism), yet testify of many surprisingly things occurring while talking and praying with people. Is it necessary to always use words? Help before hope or the other way around? The narrative is based on diary entries and is flavored with humor, constructive criticism and a growing belief in the necessary next step as an independent missionary.

Natalie Vellacott served as a police officer and detective in the UK before resigning to become a Christian missionary! Planet Police contains humorous and revealing stories from the front line.

Natalie served on the Logos Hope Christian mission ship and published her adventures in The Logos Life. Whilst on the ship she met a group of boys abusing solvents in the Philippines, They’re Rugby Boys, Don’t You Know? tells this story. Later she returned independently to the Philippines. Her fourth book is A Missionary in Manila.

Natalie prefers to read Christian non-fiction especially biographies and memoirs, theology and current affairs/issues affecting the church. She has a special interest in missions. She also reads clean fiction, usually Christian or crime. She is working on some classics. Natalie blogs at christianmissionaryuk.blogspot.com.