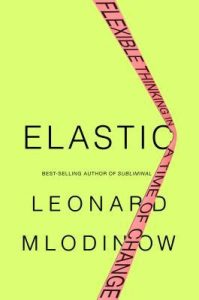 In Elastic: Flexible Thinking in a Time of Change Leonard Mlodinow takes his audience into a neurology refresher crash course. While for a long time rational, analytical, top-down driven thought ruled, latest insights favor the potential of our elastic thinking. Humans follow scripts, preprogrammed behavior e.g. fight or flight responses or navigating home. The way our brains have to accommodate the changed circumstances, the information overload, and new challenges ahead. Conclusions are reached from the bottom up through the minute interactions of billions of networked neurons in a process too complex to be detailed step by step. Neuroplasticity is no longer a new field such as when the late Oliver Sacks penned down his case studies in popular books. Progression in medical science, development of brain scanning technologies, and a better understanding of the effects of certain drugs, substances, and food. Psychologists and neuroscientists are only now working out the science of elastic thinking, although we humans have turned our powers of elastic thinking toward improving or enhancing our everyday existence.

Part 1 of the book explores the reasons for adapting our thinking to change, and why our brains are good at it. How humans (and other creatures) take in information and process it, so that they can innovate to meet the challenges of novelty and change is addressed in part 2. Part 3 is about how the brain attacks problems and generates new ideas and solutions. Leonard Mlodinow uses many examples from daily life, neurological disorders, and explains how abilities such as neophilia, pattern recognition, idea generation, divergent thinking, imagination, balance, and reconcile work. Research on the brain’s role in these traits constitutes one of the hottest new directions in both psychology and neuroscience. I really enjoyed Elastic as a recent update from these fields.

Leonard Mlodinow was born in Chicago, Illinois, received his PhD in theoretical physics from the University of California at Berkeley, and is the author of five best-sellers. His book The Drunkard’s Walk: How Randomness Rules our Lives was a New York Times Bestseller, Editor’s Choice, and Notable Book of the Year, and was short-listed for the Royal Society book award. His book Subliminal won the PEN/Wilson award for literary science writing. His other books include two co-authored with the late physicist Stephen Hawking — A Briefer History of Time, and The Grand Design. In addition to his books and research articles, he has taught at Caltech, written for the Wall Street Journal, the New York Times, and Forbes magazine, among other publications, and for television series such as McGyver and Star Trek: the Next Generation.

I received a free review copy from Penguin Random House via Edelweiss in exchange for my personal, unbiased review upon reading.