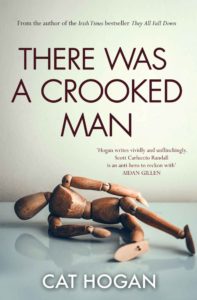 In There Was a Crooked Man, second in the Scott Carluccio Randall series, an interesting mix of drug lords operating in Marrakech, narrow escapes from enemies, wicked local mafia, and close family ties in Berlin and Ireland, entertains the reader. I hadn’t read the first instance and simply plunged into the adventures of Scott, Fran, and Jen, where paranoia, money laundering, and the pressure to keep secrets lead to various murders, and the question who will survive the mess that the main characters create for themselves and others.

The narrative has two protagonists, and is partly in the first person, partly in the third person. Evil and crookedness are all around, no brave men and women, no victory for justice.

Cat Hogan is an international bestselling crime fiction author from Ireland. Her first award nominated novel ‘They All Fall Down’ was released in 2016.
Her second novel ‘ There Was A Crooked Man’ is on general release from September 2017 and has already had a number of huge endorsements. Aidan Gillen the Irish actor who portrays Petyr “Littlefinger” Baelish in the HBO series Game of Thrones has given Cat’s second book, There Was A Crooked Man, his full endorsement!
Cat lives in her native Co. Wexford with her two boys within spitting distance of the sea. Her father Pat, a lightship man, instilled in her a love of the sea and the stars. Her mother, Mag, taught her to read before she could walk. Cat drinks too much tea, cooks way too much food and never gets enough sleep.

Poolbeg Press provided me a free advanced review copy as part of the Librarything Early Reviewers Programme in exchange for my personal, unbiased review upon reading.