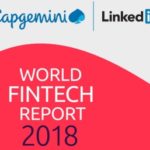 Today fintech and incumbents industry leaders and key influencers from across Europe and the US joined in a live, industry-shaping online debate around the most compelling future roadmaps for finance: the FinTech FaceOff, organized by Capgemini and LinkedIn to accompany the launch of the Fintech World Report 2018.

The event was streamed live on Youtube from Capgemini’s Accelerated Solutions Environment (ASE) in Londen and London and LinkedIn’s NYC office. The debate was moderated by Jill Schlesinger of CBS News in NYC and Sarah Kocianski (FinTech lead at Business Insider) in London. Capgemini consultants Sankar Krishnan and Elias Ghanem were co-captains on each location. The 2 ½ hour, 10 Round debate had some great executives from incumbents (Morgan Stanley, Goldman Sachs, USAA, Lloyds Banking Group, TSB), FinTechs/Challengers (Betterment, Kabbage, Monzo, Bud, CBW Bank, Goldbean, Hearsay Systems), and an Accelerator (Startupbootcamp). Social team teams from the Americas and Europe representing the biggest FinTech social influencers shared their views and promoting their teams’ live debate commentary on Twitter. Those 15 influencers have over 600k followers on Twitter and include leaders from American Banker, Reuters, and Celent. As you can imagine this led to #WFTR18 being a trending topic today because the audience was challenged to comment and vote on Twitter as well. You can watch the fast-paced debate recording here.

I collected a series of tweets and Youtube videos while watching the faceoff this afternoon. Hopefully, it’s a good and information-rich impression from the exciting and inspiring meeting.

Opening positions on identity management or #blockchain as the overhyped technologies #WFTR18 pic.twitter.com/5L413nBsHO

Indeed, this guy better should concentrate on debating. Data should lead to insight, argues @clarashih in a better contribution.

Love hybrid models! How do you get CRMs full of data if no one fills it?! #WFTR18 #FinTechFaceOff Compliance can be our friend! YES!!!

Why the cynicism about Blockchain? "Because it's basically a system for allocating wealth to geeks who hang around on Reddit!" #WFTR18 @Betterment

“Blockchain has the potential to change the ownership of data. We can use it effectively if we use it right – give it time” @nekliolios #WFTR18 @LinkedInMktg @11FSTeam pic.twitter.com/ksPN5lGMZu

"Blockchain is short humanity." It's like saying I don't believe in society, the environment. Blockchain is an expose of technical complicated solution that doesn't serve anyone who really wants it – says Dan @daniel_egan from betterment. #WFTR18

#fintech should be on customers and data. @sammaule stated that every technology is overhyped. Exciting #faceoff #WFTR18 https://t.co/an10TgnzIF

It’s interesting to watch consultants promote the value driven by challengers when their income comes from legacy clients.

The fintech revolution didn’t start in Europe, it started in Silicon Valley as over 80% of the funding of these early companies came from Bay Area based VCs. Come on. #WFTR18

Incumbent banks are like "bad landlords" says @sytaylor . Challenger banks can make money without charging hidden fees because they will have lower costs due to better tech. #WFTR18

#Tech firm with a #banking licence? Crap, according to @nekliolios during #Faceoff #WFTR18 round 7. pic.twitter.com/p1lT6RwSuZ

What really allows banks to innovate and improve is strong, nimble leaders who can make decisions quickly, I think #WFTR18

Culture is everything. How can you achieve your mission without the right people? How can you engage new customers and express any form of fiduciary responsibility through new value propositions driven by partnerships without having the right culture? #WFTR18

Damn right @nekliolios on the difference between appetite & capability: stop faffing about with all the talk on collaboration. Too much noise, not enough trousers. Hell yeah!!! #RD8EU #wftr18

The entire ecosystem of FS and FinTech firms needs to come together to make it more effective for customers – @citikris from @Capgemini at the #WFTR18 #Fintech FaceOff pic.twitter.com/vhYbEAnVng

traditional banks : “we are a technology company with a banking licence” —> rubbish 🙂 #RD7EU #WFTR18

No one in established financial institutions has any incentive to do anything different says @nekliolios Ouch again. #WFTR18

#fintech ? As an advisor you'd better pick up the phone or take a customer out for lunch. #WFTR18 Round 7 of the #Faceoff https://t.co/an10TgnzIF

"Don't underestimate the importance of creating a culture of #compliance. It's important to push back against [legacy] processes." #FinTech face-off #WFTR18

"Regulatory compliance is not the problem in #fintech collaboration. It's process compliance: 'you have to tick this box because we've always done that in this bank" Fight it! #WFTR18 @KabbageInc

“Large companies need a mindset of experimentation. People are only incentivized for cost savings and ROI.” Nektarios Liolios, Startupbootcamp #WFTR18

Legacy banks have scale, funds and stickiness of customers; innovation comes from the fintechs; Google, Amazon, Facebook have the best tech but don’t want to be banks – it’s all massively convergent.” Boe Hartman, Goldman Sachs #WFTR18

#WFTR18 @ccalmeja A MCKENZIE report states that companies that are more diverse, perform better – “this is a call to action” #FinTechEU2018

#WFTR18 #RD9EU #R9 Who will be the long-term winner as banking evolves to a marketplace model: Incumbents, FinTechs, or Big Tech?
Those that move fastest, and give the user the best UX – it's hard to see the incumbents doing this? pic.twitter.com/gYBHfSwQCU

True! Tech should solve our problem… It should not present a solution and ask us to look for a problem #FinTech #FaceOff #WFTR18 https://t.co/mC4DEoUUfA

#R9 Who will be the long-term winner as banking evolves to a marketplace model: Incumbents, FinTechs, or Big Tech? Is BigTech (Google/Apple/Facebook/Amazon) a threat or a partner/enabler? #WFTR18 https://t.co/gS3t28J3qC pic.twitter.com/CZsNFfAPjA

Ooh how I enjoyed this #WFTR18. Honestly conferences should adopt this Faceoff model so attendees can get their money’s worth.

Next up: an in-depth review of the Fintech Report 2018 itself. I’ll read it first. Get your free copy online.