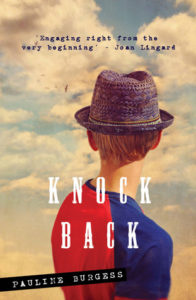 Ben has two months to find out everything he needs to know. He’s dropped off by his foster parents at Knockmore, a residential farm for troubled teens. Fixing his rebellious character, however, is not on Ben’s agenda. He’s more eager to find out who his biological parents are. The regime on the farm with sharing time in circles, chores, and staff that interferes in ways this teen cannot handle at all, is described in lively details. Lots of Irish slang and bad language fill the pages to paint Ben’s explosive temper as well as his quest for friends among the inmates.

The lovely Lauren, Frankie, the mysterious Heath, social worker Helen Crawford who seems to turn every teenager in Northern Ireland into a stay at Knockmore, and Wilson, who’s computer and other secrets are broken into, add to the set of characters in Knock Back. Featured music happens to be Rag’n’Bone Man, human after all 😉

Pauline Burgess is a writer and teacher from County Down who is inspired every single day by the children around her, including her daughter and her students. The Arts Council of Northern Ireland recognized her passion for writing for children when they granted her the Artists’ Career Enhancement Award in 2013. Her series for younger readers – Pony Friends Forever – has become extremely popular with primary schools all over Northern Ireland, and Pony Surprise was an Eason top-ten bestseller. Paulien regularly visits schools and libraries across Ireland in her capacity as an author and active proponent of reading for pleasure.

I won a complimentary copy from Poolbeg Press in the August LibraryThing Early Reviewers edition,