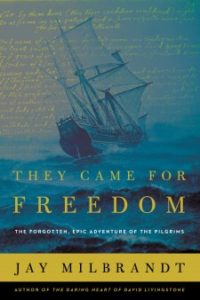 The Pilgrims did not create a Thanksgiving holiday, not intend that future fall institution. A singular event after two years of hard circumstances upon arrival in New Plymouth was a one-off expression of gratitude. Turkey or cranberries weren’t on the menu of the Pilgrim Fathers. Somehow the tradition in the spirit of the Pilgrims became a common tradition in New England and institutionalized in the 19th century throughout the United States.

Jay Milbrandt delves into the history of the first group of Separatists and Puritans heading for the new world in 1620. Thanks to the writings of William Bradford who served several times as governor of New Plymouth over the course of thirty-six years, particularly Of Plymouth Plantation, served Milbrandt the most useful documents chronicling the Pilgrim’s Journey in England, the flight to Leiden, the Netherlands, their departure from Delfshaven (near Rotterdam), their rough cross-Atlantic voyage, and initial years north of Cape Cod on the coast of modern-day Massachusetts.

They Came for Freedom: The Forgotten, Epic Adventure of the Pilgrims is no true epos, no real heroes out there. Fallible, true to life men and women with a temper, bad habits and pretty strong convictions are the main characters. The narrative is honest and open on the fight for separation of state and church in late medieval England and the harsh resistance to any kind of Reformation in the Church of England. Once landed in America ethical dilemmas occurred. Wasn’t the land ‘patented’ on behalf of the King of England stolen from the Indians? Is divide and conquer a Christian doctrine? Can death penalty be justified? And how strict are state and church separated in the New World?

Somehow – the Fathers believed in God’s provision and saw many miracles happen – the New Plymouth enterprise succeeded and became the foundational story for the Constitution and the American identity. The Forgotten, Epic Adventure of the Pilgrims is a commercial sounding subtitle. Are you willing to discover one of the roots of the American society?

Jay Milbrandt is an attorney and professor at Bethel University in Minnesota. He is a Senior Fellow in Global Justice at the Nootbaar Institute at Pepperdine University School of Law where he formerly directed the Global Justice Program. He has traveled throughout the world as a human rights lawyer, managing global initiatives in Africa and South East Asia, and consulting with organizations engaged in human rights and legal development efforts. Jay produces documentaries and photography exhibits and blogs about justice, service, adventure, and travel.

I received a complimentary copy of this book through Booklookbloggers in exchange for my personal, unbiased review upon reading.