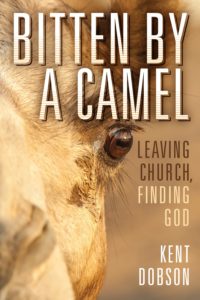 Kent Dobson climbed Mount Sinai in search of a sign or spoken word by God. Instead, his arm was bitten by a camel. It led in 2015 to step down from megachurch Mars Hill Bible Church, the one that founder Rob Bell left before Kent. Undoing and unlearning the way a particular group of evangelicals was born and bred in America, Dobson went on a path to leave the church, unload his spiritual camel in order to pass the needle’s eye and reconstruct a new kind of faith, settled in mystic and knowledge of not knowing God.

Bitten by a Camel: Leaving Church, Finding God may read like a shocking coming of age if preacher and pastor, youth minister and worship leader Kent Dobson was your example and poster child for your type of Christianity. His flirts with Judaism, Eastern Orthodox churches, and mystics may well be way off your comfort zone. The book can also serve as comfort for wanderers, fellow faithful Christians looking for God in unexpected places. For Dobson it meant not throwing everything away he learned as a Christian, although he perceives concepts like Trinity, literal resurrection, Rapture, End Times predictions, Moral Majority, 4-parts Bible Grand Story, and a Creation in 6 days as heavy packages in need to unload from his own camelback.

Life cannot be divided into a secular and spiritual life. God is everywhere and willing to dwell in everyone. Dobson recommends learning to trust your real life again. That may mean enjoying Radiohead’s OK Computer album more than the book of Psalms at times. “God will not show up if we’re good enough, right enough, spiritual enough, or somehow have the moral fortitude to ward off all ambiguity and messiness. God will not meet us on the top of a mountain, just because we make a big deal about going there,”

A lighter camel to ride on, traveling unknown paths, unbound by church perimeters or doctrines. On one hand, it sounds like a true liberation. On the other hand, accountability, trust to care for spiritual sheep, joining Christ’s body as living stones instead of walking away pondering the thought of the need for churches – even without a building or institutionalized organization – are core to faith and religion too.

Kent Dobson is the former teaching pastor of Mars Hill Bible Church in Grand Rapids, Michigan, where he initially served as the worship director. He’s also been a Religion teacher, scholar and has been featured on Biblical programs for the History Channel and the Discovery Channel. Kent lived and studied in Israel which expanded his world and helped unravel parts of his faith. He currently leads retreats and wilderness programs designed to cultivate human wholeness and pursue the perennial questions of the soul. He also guides pilgrimage adventures to Israel and occasionally speaks and lectures. Kent lives in Ada, Michigan, with his wife and three children. Bitten by a Camel reveals some behind-the-scenes of Mars Hill, and the true reason for him to step down as pastor in 2015.

I got a free review copy from the Fortress Press through Edelweiss in exchange for my personal, unbiased review upon reading.