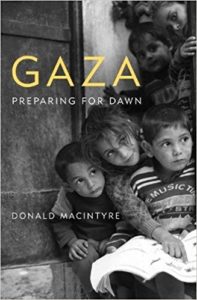 Hope against hope characterizes the message Donald Macintyre wants to bring across when talking about Gaza. The Strip, contrary to the one in Las Vegas, in Palestine is a large prison, facing the consequences of broken promises, missed opportunities, iterative wars and incursions and internal leadership fights. And yet….that’s the page-turner you’re looking for when keeping an eye on the sub-title of Gaza : Preparing for Dawn. The Independent’s former Jerusalem bureau chief provides an in-depth analysis in chronological order of the history and fate of the Palestinian people living in Gaza. He focuses on the Strip, leaving the West Bank or Palestinians living in Jordan and Lebanon out of scope.

The British Mandate, the establishment of the State of Israel, the wars, Intifadas, periods of relative quiet and ones with uproar and tensions. The negotiations, “Peace Process”, tunnels, perimeters, rockets, walls, building and destruction of infrastructure. It’s all in this book, leaving no rest for the reader, let alone an attempt to promote a bright future and a happy end. Yes, the author tries to inject some hopeful stories from within Gaza into the narrative. Entrepreneurs, Christian communities, small-scale initiatives, and dreams about a well-functioning infrastructure for commuters between the West Bank and Gaza. Honestly, I had hoped for more, knowing that still, peace is to be created there. Donald Macintyre tries to be as balanced as possible, being open to the many useless acts of injustice by the Israelis, the provocations, and armed warfare from Palestinian side as well. Israeli left-wing and right-wing politics, hawks turned into doves, warriors into Nobel Peace Prize winners, Hamas and Fatah, the EU, UK, USA, Egypt, Jordan, and Turkey: all parties are interwoven, and cannot walk away as if they didn’t contribute to the status quo. Neither can they be denied when working towards a sustainable solution.

Gaza is not a good versus bad story or a condemnation of just one side. It’s an appeal to work towards dawn where all inhabitants can live in harmony and prosperity, regardless their ethnicity, religion or political points of view.

About the author
Donald Macintyre was the Independent’s Jerusalem bureau chief for eight years between 2004 and 2012. He won the Next Century Foundation‘s Peace Through Media Prize in 2011 and has previously been shortlisted for the Orwell Prize for journalism and for the Martha Gellhorn journalism award. He lives in London.

I received a free review copy from the Oneworld Publications through Edelweiss in exchange for my personal, unbiased review upon reading.