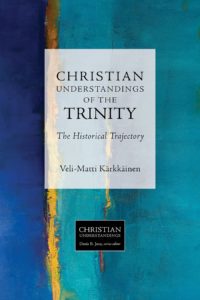 Author Veli-Matti Karkkainen leads theology students and interested lay people along the trajectory that the doctrine of the divine Trinity made in Church history. It’s what basically distinguishes the Christian understanding of God as a Christian from the Jew, Muslim, Hindu, etc. in their respective religions or concepts of revelation. In Christian Understandings of the Trinity: The Historical Trajectory a three-part journey starts with the bishops and theologians that figuring out how to express as detailed possible the teaching of the New Testament and their experiences in the Spirit-led churches, where supernatural gifts, signs, and wonders were practices.

Is God, the Father of Jesus Christ, the same as JHWH that manifested himself in the Jewish scriptures? Is Jesus Christ God? And the Holy Spirit? Do Christians actually believe in three Gods or One? Is there some kind of hierarchy or procession with Father, Son, Holy Spirit? Every Christian should have a basic mastery of meaning, content, and significance of the doctrine of the Trinity.

The bishops in the first three centuries after Christ’s death and resurrection accomplished a lot. The rebutted heretics and unified the Orthodox point of view in the Nicene (325) and Constantinople (381) creed. In the second part, the doctrine further developed. The ‘filioque’ clause (that the Spirit proceeds from the Father and the Son) was revised. In both the Latin (Western) and Greek (Eastern) branches of Christianity theologians worked on better formulas to get a grip of the Trinity.

In the Reformation (both leading to the Protestant Church, as well as within the Roman Catholic Church) less emphasis was laid on the precise formula, although the classic creeds were adhered to, and restated to help the Christians of that era. This third part of the book investigates the way Enlightenment and modern theology influences the perspective on the Trinity. Karkkainen end with the contemporary feminist theology and liberal streams, plus contemporary genuine and innovative ways to reach conclusions on the doctrine of the Trinity. This primer is information rich and accessible.

Veli-Matti Karkkainen is a professor of Systematic Theology at Fuller Theological Seminary. He also holds a teaching position at the University of Helsinki as Docent of Ecumenics. Prior to coming to Fuller, Karkkainen served as president and professor at IsoKirja College in Keuruu, Finland. Prolific and widely published, Karkkainen has authored or edited over twenty books in English.

I received a free review copy from the publisher Fortress Press through Edelweiss in exchange for my personal, unbiased review upon reading.