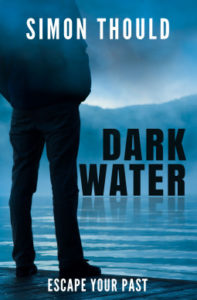 Jac is missing. Her mother, Madeleine turns to Alex Rafter, a sniper, ex-special forces combat soldier. In his New Forest habitat, Dark Water in Beaulieu (quite a contrast with the book title), traces lead to Jac’s horse. Rafter also has a soft side, taking care of a newfound dog, Lonely, and has to be aware of the distraction by sexy women along his quest to find out where Jac is kept. Trafficking, Hell’s Angels, lazy yet eager local cops, underground casinos and drug deals are ingredients to keep the reader nailed to the couch to know who’s who and whodunnit. Rafter drinks vodka like water. His conversational skills are minimal. Yet he’s clever enough to plan each next step until Jac is safe with her mother again. Dark Water is action-packed. Yes, there’s a sexual undertone, but no explicit scenes. Business before pleasure 😉

Simon Thould was born in Somerset, where he went to public school and played rugby and cricket with more enthusiasm than he studied. He later managed to qualify as a chartered surveyor and practised for twenty years in both public and private sectors in London and the south of England. He also worked as a restaurant and bar manager before moving with two black cats to a farmhouse in the mountains Andalucia for a year and a half. There he wrote his first novel.

He moved back to the UK and worked as a resident housekeeper and groom in Kent and wrote his second novel.

Then he relocated to the USA for several years and worked in warehouse stock control, sold insurance and then art work from a gallery in Downtown Charleston, South Carolina. Returning to the UK again, he worked as a postman and in several retail sales positions and wrote a third novel.

His passions, other than writing, are reading ‘hard-boiled, noir’ novels, watching classic movies and betting on National Hunt horse racing. He has been married and divorced twice and has one daughter.

He currently lives on the island of Gozo in the Mediterranean where he wrote Dark Water.

I received a free review copy from Thistle Publishing‘s David Haviland in exchange for my personal, unbiased review upon reading.