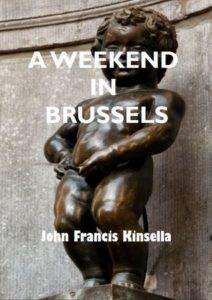 Patrick Wolfe, the protagonist of A Weekend In Brussels, is portraited as a selfish 26-year-old boy that cannot keep his eyes and hands off the birds (ladies, women, chicks) around. It’s his narrative on jobs in the upcoming air conditioning industry (yes, we’re talking 1966!), and a sequential travelogue from trips throughout Europe with Elsa, a Finnish exchange student, as well as Mylene, the girl he picked up in a Brussels café, and immediately followed her to Bruges (not Brugge, John!), jumpstarts a beach trip to Blankenberge, while all of a sudden Mylene disappears from the pages, and past journeys to France, and Italy are recounted. Yes, the European Continent constantly surprises the Brit Wolfe, and for a good reason.

For a couple of reasons, I’m not enthusiastic about this book. Throwing in local flavors like language, food, and place names normally enrich the book. It must be done consistently and correctly. In A Weekend in Brussels, it’s clear that the author doesn’t master Dutch, French, German, Italian, and he’s using both Flemish, French, as well as English place names for Belgian cities. squares and streets. Manneken Pis, prominently featured on the book cover, is incorrectly called Manikin Piss, Pat’s host is sometimes Van de Bosch or Van den Bosch, and so are the few non-English phrases in the book. Patrick Wolfe uses the f-word frequently, both in his slang as well his promiscuous behavior, leading to a sore dick (to quote the author on this). The sudden disappearance of Mylene may be a signal that the author actually wove at least two narratives into one, without proper proofreading or editing. A typical plea to “show, don’t tell” is needed.

John Kinsella lives in France where he spends his time between Paris and the Basque Country, that is whenever he is not traveling further afield in search of experience and new ideas. He has written nine novels and translated two of his books to French as well as seven other books on archaeology, architecture, biographies, and religion from French and Spanish into English.