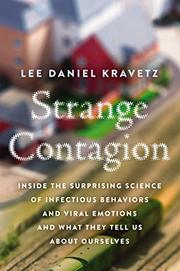 Since 2009 the life in the Silicon Valley town of Palo Alto was disrupted by a series of high school teenagers committing suicide. Respected journalist Lee Daniel Kravetz, a newbie in town and fathership, wrote Strange Contagion: Inside the Surprising Science of Infectious Behaviors and Viral Emotions and What They Tell Us About Ourselves, about the quest for the rationale for this special kind of social contagion.

Kravetz did a step-by-step investigation on possible causes: from bulimia, stress among teenagers and their parents, and the high expectations of Silicon Valley entrepreneurs and their families. Were the media to blame for the ongoing suicide attempts? Is it better to uphold ‘radio silence’ in the aftermath of another teenager jumping before a train? But hey, in most cases the children didn’t know each other. They had everything going for them. Each was popular, valued, talented, and happy.

So, would emotional intelligence, social affection, real friendships be key? Will social intervention with accountability groups, cohesion-seeking activities in neighborhoods solve the problem? The journalist spoke to scientists, dared to discuss previous beliefs and convictions to end up with the social power of interpersonal networks.

Lee Daniel Kravetz has a master’s degree in counseling psychology and is a graduate of the University of Missouri-Columbia School of Journalism. He has written for Psychology Today, the Huffington Post, and the New York Times, among other publications. He lives in Northern California with his wife and children.

I received a free review copy from HarperCollins publishers through Edelweiss in exchange for my personal, unbiased review upon reading.