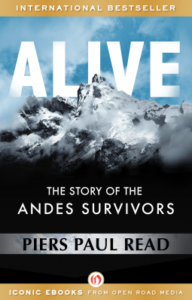 In 1974 Piers Paul Read authored Alive: The Story of the Andes Survivors, based on interviews with the boys that survived the  Fairchild F-227 crash on Friday, October 13, 1972, parents, officials, and the Dutch clairvoyant Gerard Croiset Jr. At that time I was a toddler, I must have seen the movie version (1993) sometime. Now, in 2016 with the publication of the e-book version of this #1 New York Times bestseller, I had the chance to dig into this miracle come true in a 5+ hours read.

Only sixteen of the original forty-five passengers on the F-227 survived. Shocking is the pace in which one turned to cannibalism, and yes the described cruel details may not be the best chapter to read before sleeping. Intriguing is the psychology of the Uruguayan amateur rugby team, their friends, and family involved in attempts to make a safe place for their own, share warmth and ration food. Brave the efforts to search the harsh mountain area to look for food, human habitation, and use everything available from the wreckage. Inspiring is their faith in God.

10 weeks after the crash, two of the survivors attempted an all-or-nothing descend and discovery of a Chilean peasant. Read could use the bare facts to sustain the narrative of the days before the crash, its aftermath, as well as the reception of the survivors by family, journalists, and church officials.

Piers Paul Read is a British novelist and non-fiction writer. Educated at the Benedictines’ Ampleforth College, and subsequently entered St John’s College, University of Cambridge where he received his BA and MA (history). Artist-in-Residence at the Ford Foundation in Berlin (1963-4), Harkness Fellow, Commonwealth Fund, New York (1967-8), member of the Council of the Institute of Contemporary Arts (1971-5), member of the Literature Panel at the Arts Council, (1975-7), and Adjunct Professor of Writing, Columbia University, New York (1980). From 1992-7 he was Chairman of the Catholic Writers’ Guild. He is a Fellow of the Royal Society of Literature (FRSL).

His most well-known work is the non-fiction Alive: The Story of the Andes Survivors (1974), an account of the aftermath of a plane crash in the Andes, in 1993 adapted as a film.

I received a free review copy from the publisher, Open Road Media, through Netgalley in exchange for my personal, unbiased review.