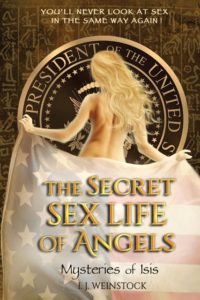 Hyped as a combination of The Da Vinci Code kind of intrigue and controversy, spirituality, and the eroticism of the Kama Sutra, I was offered to take a look at The Secret Sex Life of Angels. The author, Jerry Weinstock, promised that I would never look at sex in the same way again. After the crucial first hundred days as President of the United States, Adam Hart, is unsatisfied. His lacking libido hinders the intimacy with his wife Eve, a traumatized rape victim. Like a fairy tale, Marlin, a secret messenger bypasses all the White House security measures and invites Adam to get initiated in a secret only Hart’s predecessors had been introduced to. Grant the US a future through sexual energy.

The sexual odyssey teaches Hart the principles of Tantric sex and ultimately love. Applying it back home to his challenging relationship with Eve is more difficult. Fantasy versus real world, love includes sexuality, and not necessarily vice versa. I didn’t discover much of intrigue, the lessons by Tantrika are pretty straight forward, and the pace of both the first 20% of the book, and it’s ending are too slow to really keep me hooked.

I’m the son of Holocaust survivors and grew up in New York and New Jersey. In high school, I performed in musicals and became a football “hero” winning the Homecoming Day game with a 65-yard touchdown.

I’ve enjoyed a varied career in the arts–acting on stage, appearing in films, and even doing performance art on the streets of New York. While producing television in Los Angeles, I created a new cable network, The Game Channel, the precursor to GSN (the Game Show Network). I’ve also written several books.

Years ago, with my first wife, Daphna, I co-authored a controversial and groundbreaking book about women. BREASTS: Women Speak About Their Breasts and Their Lives (Simon & Schuster) was hailed by the Washington Post as “an important contribution” and the subject of an entire Donahue Show (the Oprah of its time).

In my recent memoir, JOYride: How My Late Wife Loved Me Back to Life, I described my year of grieving after the death of my 2nd wife, Joy. A remarkable thing happened–she began communicating with me from the Afterlife and led me on an incredible journey to heal my grief. Ultimately, like the final scene in the movie, Ghost, she found someone–a willing medium–through whom she literally loved me back to life. Had I not experienced it myself, I wouldn’t have believed it possible.

Those sacred, sexual, supernatural encounters, which I call the Rites of Joy, occurred ten times during that year and helped heal my inconsolable grief. During these other-worldly sexual initiations, I was shown some of the secrets of human sexuality.

I received a free review copy from the author in exchange for my personal, unbiased review.