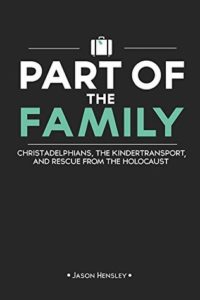 While Adolf Hitler’s nazi regime was gaining power, antisemitism was blooming, a rescue effort was made in 1938 and 1939, to help Jewish children escape from Nazi-occupied territories in Europe to find safety in Great Britain. The country had decided to accept 10,000 children to come over, provided a pledge of £50 was made as a guarantee. This movement was called the Kindertransport. BBC calls to action stirred many members of a Christian sect named Christadelphians, who just as they sponsored Montefiore’s establishment of kibbutzim like Rosh Pinna in Israel in the late 19th century, as well as the practical help for victims of the 1905 Russian pogrom, to put their teachings and beliefs into action again.

Christadelphians sponsored approximately 250 of these children, not only pledging money, but by opening their houses and families to them as well. 10 foster children, who had their parents stay behind in Germany, Austria, Poland, and Czechoslovakia, were interviewed for this book. 10 individuals with personal backgrounds, emotions and a different course of life during and after the war. Jason Hensley in Part of the Family: Christadelphians, the Kindertransport, and Rescue from the Holocaust, not only shares backgrounds of the Christadelphians in the first part, includes historical backgrounds of the years these children were born, but also their life with their British foster parents. A book abundant of gratitude, personal tragedies, lost family members, and unique chances to survive World War II and start their own families.

The author released a couple of videos as well of two of the survivors, Ursula, and Rella.

Jason Hensley, M.Ed, is the principal of a private school in California. At school, he teaches religious studies and a senior-level course on Christianity and the Holocaust. The material for this book has served as the backbone for the curriculum in the latter course. He frequently lectures on this and related topics throughout North America. Find him on Facebook, and at iwaspartofthefamily.com

The author provided me a free review copy of the book in exchange for my personal, unbiased review upon reading.