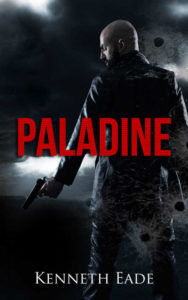 The discovery of actual ISIS and related terrorist cells, training facilities throughout the United States of America inspired Kenneth Eade to write more than just another assassination thriller. He uses the legendary Paladine deity from the Dragonlance fantasy series as name bearer for his latest work of fiction. Meet Robert Garcia, a man with many names. His aliases and above the law status as a self-employed assassin, are the perfect cover to pop up and eliminate Islamic terrorists prior to their planned attacks. A dangerous mission that only disturbs the ISIS leadership, but also awakens the FBI and CIA.

The agencies are initially unable to trace this underground hero, but despite the high-tech, smart weaponry, and measures taken for coverage, also Garcia is a fallible human. Will he survive his masterpiece mission, or die on the spot? Will the cops bring him to justice, or let him continue doing what they’re unable to complete? Paladine was a great read, up-to-date, and entertaining.

About the author
Kenneth Eade (1957) is best known for his legal and political thrillers, practiced law for 30 years before publishing his first novel, An Involuntary Spy. Eade, an award-winning, best-selling Top 100 thriller author, has been described by his peers as “one of the up-and-coming legal thriller writers of this generation.” He is the 2015 winner of Best Legal Thriller from Beverly Hills Book Awards and the 2016 winner of a bronze medal in the category of Fiction, Mystery and Murder from the Reader’s Favorite International Book Awards. His latest novel, Paladine is currently a quarter-finalist in Publisher’s Weekly‘s BookLife Prize for Fiction. Eade has authored three fiction series: The “Brent Marks Legal Thriller Series, the Involuntary Spy Espionage Series, and the Paladine Anti-Terrorism Series. He has written fourteen novels which have been translated into French, Spanish, Italian and Portuguese.