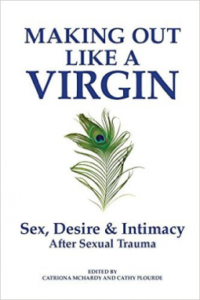 Rather than doing a statistical analysis, providing a self-help book or writing a memoir with the point of view from a single person, Catriona McHardy, Cathy Plourde & Sue William Silverman invited 17 sexual trauma victims turned into survivors to tell their own stories or the lessons learned from the past. Making Out Like a Virgin: Sex, Desire & Intimacy After Sexual Trauma is a unique collection of women, men, and transgender, from the United States of America, but also Cairo, Dubai, Dublin, Melbourne, and Toronto. The survivors are now in their mid-20’s to 60’s.

Their contributions don’t focus on the rape or other sexual assault in detail, nor the aggressors, although the way ‘things’ happened are described in both honest, superficial, or raw phrases. You will encounter consent, the need for power or transactional sex, incidents and lasting abuse. Sex separated from love, sex with minors, same-sex rape, drug-related sex, etc. You will meet queers before and after coming out, struggles to rediscover pleasure, and repositioning sex in a relationship and love. Some found healing in women’s groups, others in practicing yoga, mindfulness, or traveling through South America.

The book’s narrative go way beyond just survival but excels in flourishing as reborn humans, willing to educate others, remain faithful to their current partners, writing books or discovering the world around being not a horrible place. Broken vessels or damaged goods renewed!

Catriona McHardy has spent her life studying human sexuality and formally held a career promoting healthy expressions of sexuality, individually and culturally. In 32 years at Planned Parenthood of Northern New England, she rose from health care associate to longtime Vice President for Education and Training. She led a team of “sexperts” who provided sexuality education and training to professionals, teens, and parents regionally, nationally, and internationally, including Uganda and Russia. Catriona is a consultant and trainer on issues pertaining to sexual expression and sex positive culture, and a faculty member at Community College of Vermont, where she teaches courses in communication, race, ethnicity, class and gender, and human sexuality. She has served as national co-chair of the Association of Planned Parenthood Leaders in Education and has won the PPFA’s Award as Director of the Year. Catriona was named as the first Distinguished Alumni Award from the Vermont State College Hall of Fame. She was a longstanding board member of the Women’s Crisis Center in Brattleboro Vermont and Outright Vermont.

Cathy Plourde‘s plays on coping with eating disorders (The Thin Line) and engaging bystanders in interrupting violence (You the Man) have been presented across the US and have been culturally translated for use with Melbourne’s Deakin University. She has presented and published nationally and internationally on theater and arts for social change, wellness, education, and community building, and has received commissions and artist residencies from numerous organizations to develop works addressing these issues. As founder and director of Add Verb Productions, she raised over a million dollars to promote this work, including the award-winning performance and activism anthologies (Out & Allied, vol. 1 and 2) for LGBTQ youth and their allies. She attended the Breadloaf School of English, was a long-standing Honorary Artist in Residence at the University of Southern Maine, served as a founding member of Boys to Men Maine and the Pride Youth Theatre Alliance, and taught in Integrated Health Sciences at the University of New England.

Sue William Silverman is the author of three memoirs. The Pat Boone Fan Club: My Life as a White Anglo-Saxon Jew is part of the “American Lives Series” with the University of Nebraska Press. Because I Remember Terror, Father, I Remember You won the Association of Writers and Writing Programs Award Series in Creative Nonfiction. Her memoir, Love Sick: One Woman’s Journey through Sexual Addiction, was also made into a Lifetime TV Original Movie. Her craft book is Fearless Confessions: A Writer’s Guide to Memoir, and her poetry collection is Hieroglyphics in Neon. As a professional speaker and writer, Sue has appeared on many nationally syndicated radio and TV programs including The View, Anderson Cooper 360 on CNN; a John Stossel Special on ABC-TV; CNN-Headline News; the Montel Williams Show; the Ricki Lake Show; and the Morning Show with Mike and Juliet. She was also featured in an episode of “The Secret Lives of Women” on WE-TV. Sue teaches in the low-residency MFA in Writing Program at Vermont College of Fine Arts.

I received a free review copy from Bookbuzz through Netgalley in exchange for my personal, unbiased review upon reading.