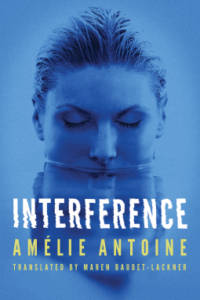 Interference, the English version of Amélie Antoine’s successful dark novel Fidèle au poste. Gabriel and Chloé have a stable marriage. No wonder Gabriel is struck with grief upon identifying the corpse the police had picked up from the open sea as his wife. The novel describes the grief and recovery in the months following Chloé’s tragic death. The author chooses the characters as alternating protagonists. At a self-help group for widowers and widows, Emma shows up. She’s a promising photographer dreaming of a major break-through.

Gabriel and Emma take it slow, but grow as a couple, despite Gabriel’s hesitation to jump into a new relationship and simply forget Chloé. Chloé however still plays her part in the novel, as if her ghost is monitoring the developments. Chloé also has hidden a couple of secrets from Gabriel, which makes him suspicious. Was his wife adulterous? Who is that unknown man, that happened to be at Chloé’s funeral? Is Gabriel now entitled to enjoy his newfound love, Emma? Who interferes when and why?

The brilliant novel then takes a surprising twist. Every new situation leads you to think of how you would react if exposed to the same challenge? Will love last until death do us part?

About the author
Amélie Antoine lives in northern France with her husband and two children. She has always loved writing, particularly stories. In 2011, she published an autobiography titled Combien de temps. Interference is her first novel and was an immediate success when it was released in France, winning the Première Lauréate du Prix Amazon de l’Auto-Édition (Amazon France Self-Publishing Prize) for the best self-published e-book. She has since written two other novels.

I received a free review copy from the publisher through Netgalley in exchange for my personal, unbiased review.