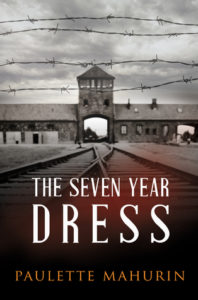 In her new novel, The Seven Year Dress, Paulette Mahurin, digs in World War II, a theme many authors already wrote about, both fiction as well as non-fiction. For a contemporary writer, therefore a challenge to find a spot that may or not may unique, but has opportunities to interest an audience quite familiar with the grand story of Nazism, Holocaust, and the devastation brought to European society. In the Seven Year Dress the personal story of Jewish Helen is revealed for the first time to Myra, a young student looking for an apartment and still struggling whether or not to regard herself as Jewish.

Helen was born and raised in Berlin, Germany. The upcoming separation of Jews and Aryans, the rise of Adolf Hitler, his ideology and the Endlösung for Jews, homosexuals, gypsies impacts Helen’s family and friends directly. Max, keeping his homosexuality a secret, joins the Hitlerjugend, while Helen learns to sew in order to have a job and earn money, once she’s no longer allowed to go to school. Max proves to be a unique human, protecting Helen and her brother Ben where possible. It will cost his life, whereas Helen’s other family members died or got missing in the course of war. Helen survives the Auschwitz concentration camp, although her virginity and feminity were brutally taken from her. Nothing lasts, and life’s too special to lose it are the hopes she anchored to. What makes this novel special is the attention paid to all kinds of human sexuality, both in the Berlin youth years, the shelter in a farmhouse near Brandenburg, as well as in the concentration camp. A moving story set in the darkest decades of the 20th century Europe.

Paulette Mahurin lives with her husband Terry and two dogs, Max and Bella, in Ventura County, California. She grew up in West Los Angeles and attended UCLA, where she received a Master’s Degree in Science. While in college, she won awards and was published for her short-story writing. One of these stories, Something Wonderful, was based on the couple presented in His Name Was Ben, which she expanded into a fictionalized novel in 2014. Her first novel, The Persecution of Mildred Dunlap, made it to Amazon bestseller lists and won awards, including best historical fiction of the year 2012 in Turning the Pages Magazine. Her third novel, To Live Out Loud, won international critical acclaim and made it to multiple sites as favorite read book of 2015. Semi-retired, she continues to work part-time as a Nurse Practitioner in Ventura County. When she’s not writing, she does pro-bono consultation work with women with cancer, works in the Westminster Free Clinic as a volunteer provider, volunteers as a mediator in the Ventura County Courthouse for small claims cases, and involves herself, along with her husband, in dog rescue. Profits from her books go to help rescue dogs from kill shelters.

The author provided me a free review copy of the book in exchange for my personal, unbiased review upon reading.