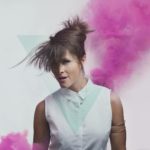 Danae‘s alternative pop debut album Direction, actually a 5 song EP was released in June. Advertised as music for fans of Coldplay, Ellie Goulding, and Mikky Ekko was enough to trigger my interest. Pop yes, without the sweetened, computerized voices you hear in an average top-40 radio show. Lyrics are a little deeper as well. “There’s gold in the dirt.” Courage found, fears battled, and love enjoyed. “Feet on the edge / Take a deep breath / Set for a free fall
The time is now / Take a first step / Off of the back wall
Running like a blind man to a lover’s call.”