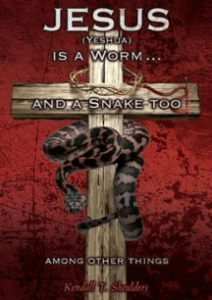 Jesus made bold claims during his lifetime on Earth. Was He indeed the Son of God, the Messiah the Jews were expecting for ages? Did indeed the Scriptures point to Him? Or were these mere lies? Kendall T. Shoulders in the remarkably titled Jesus (Yeshua) is a Worm…and a Snake Too, Among Other Things takes his audience across the Old Testament stories and prophecies with two animals pointing at Jesus Christ and His death and resurrection.

First, the special Tola worm appearing not only in Psalm 22, but in numerous other places being the source of the color scarlet. Second the snake, the one Moses had to lift high so that the people of Israel could look at it and be healed, and the way Jesus Christ was hung on a cross to become the life bearing serpent for us. Wonderful, how the biblical prophecies and characters tell much more than a superficial reading would reveal.

Along this journey through the Bible you’ll learn more about God’s timing, the meanings of colors, and the precise way the curse Satan is given after seducing Adam and Eve is executed. Hopefully in the end you’ll have a clear understanding of who Jesus Christ is, and you don’t have to wait for another messiah to deliver you from sin.

Author and Elder Kendall T. Shoulders continues to teach and assist in preparing in-depth studies for his current church Antioch Cumberland Presbyterian Church of America in Athens, Alabama and also for friends and churches who are seeking to enrich their understanding of scripture. Kendall T. Shoulders continues to tackle the tough subject matters of prophecy avoided by many who fear controversy.

Along with authoring ‘A Purpose-Filled God: Shadows of the Almighty’ and his current work ‘Jesus is a Worm and a Snake too…..among other things’, Kendall T. Shoulders is also an enthusiastic Gospel Saxophonist. As an artist, he recorded the CD ‘My Imperfection: God’s Amazing Grace’ at the renowned Fame Studio in Muscle Shoals, Alabama.

Kendall T. Shoulders received a Bachelor’s of Science degree in Mathematics in 1996. It was during his long hours of studying that he realized how temporary the use of a Mathematics degree would be.  He made a promise that after graduation, he would study the bible with the same vigor and hours as he had studied Mathematics in college.Kendall’s interest in theology and prophecy began to deepen more and more in the 1990’s as he became enlightened about the real truths of scripture and not just the traditional rhetoric. He began teaching biblical studies in January 2003 at Antioch Cumberland Presbyterian Church of America in Athens, AL under the direction of Pastor Robert L. Rice.

I received a free copy from Netgalley in exchange for an unbiased, personal review upon reading this book.