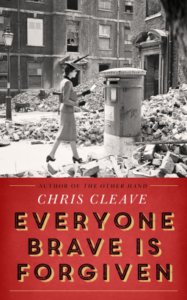 Chris Cleave, a multi-award-winning British author, takes his readers back to World War II, September, 1939 until June, 1942 actually. Just when the war was declared, Mary North, dropped out of school and signed up for the War Office for a teacher assignment. Taking care of negro children in London is not what is expected from her. She’s left alone with the weak and orphaned ones, whereas other children were evacuated to safer places in the countryside. Mary met Alistair, a former Tate conservator, but even before she really could fall in love and kick off courting, he was conscripted and sent to Malta to protect the island from both German and Italian attackers.

Mary meanwhile continued doing whatever she can to safeguard the children en survive during the endless German air bombings on London. The plot’s full of fine details and motifs. From a jar of jam to be saved, pieces of art, the peculiar micro world of Malta, social justice, fairness to all, including Germans, the violence and deception. The story concludes with restoration of the love couple and forgiveness needed to get both physical and emotional wounds healed, and start over again.

Everyone Brave is Forgiven has a slow start, but gets better over time, really keeping you locked in in the third part.

Chris Cleave was born in London and spent his early years in Cameroon. He studied experimental psychology at Balliol College, Oxford. His debut novel, Incendiary, won a 2006 Somerset Maugham Award, was shortlisted for the 2006 Commonwealth Writers’ Prize, and is now a feature film. His second novel, Little Bee, is a New York Times #1 bestseller with over 2 million copies in print. Gold is his third novel. He lives in London with his wife and three children.