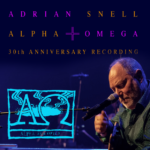 Nearly 30 years ago the British composer and musician Adrian Snell released the landmark album Alpha & Omega. Amidst a spiritual journey into the impact the Holocaust had on the Jewish people, and the biblical prophecies of a coming Jewish Messiah in an attempt to reconcile Jews and Christians. Ask for forgiveness and grace for all the transgressions against God’s people, yet convinced of Jesus Christ being the Messiah, the One claiming to be the Alpha and Omega, the Beginning and the End. Hope for mankind, and gracious Lord who paid for our sins. Alpha & Omega originally appeared as closing track of the 1984 album Feed the Hungry Heart. The 1986 original album Alpha & Omega is out of stock. I think it was the last LP of the Brit we bought at home, before switching to compact discs. I went to many concerts of Adrian Snell concept albums myself, still treasuring the impact of timeless symphonic rock music meets faith.

Adrian Snell took up the challenge to re-record the album as a tangible result of the 30th Anniversary of Alpha & Omega celebration. Snell and friends will be playing a string of concerts in the Netherlands and they’ll record these performances in order to have the foundation of what will become a re-recording of Alpha & Omega. It will be quite the undertaking: a 60-piece choir (led by Dutch director Maarten Wassink) and a full band with top musicians from the UK & the Netherlands (including past & present members of IONA: Dave Bainbridge, Frank van Essen and David Fitzgerald). And all of it presented with spectacular sound and lights!

Adrian Snell is seeking support in a IndieGogo crowdfunding campaign to enable to: