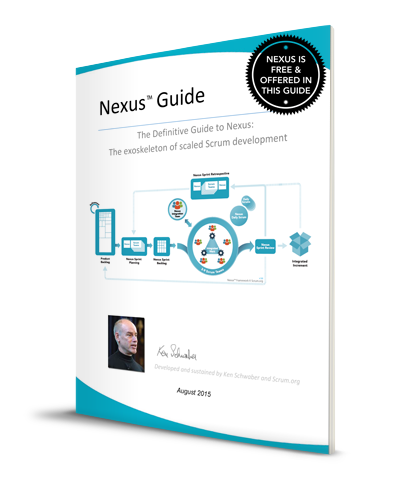 Nexus is a framework consisting of roles, events, artifacts, and techniques that bind and weave together the work of approximately three to nine Scrum Teams working on a single Product Backlog to build an Integrated Increment that meets a goal. It uses Scrum as its building block. The Nexus Guide (free downloadable PDF) contains the definition of Nexus, consisting of:

At the end of the sprint, we have the Nexus Sprint Review demonstrating, showing the Integrated Increment. This is a joined review with all team and replaces the individual Scrum Team Reviews. An overall Nexus Sprint Retrospective focusses on inspection and adaption and consists of three parts:

Unfortunately, the Nexus Guide is superficial as soon as it becomes practical. Under Software practices: “Many software development practices are needed to bind the work of the Scrum Teams collaborating to create an Integrated Increment. Most of these practices require automation. The automation helps manage the volume and complexity of the work and artifacts especially in scaled environments”

In other words, there’s no attention to:

As Henny Portman noted in his review of the Nexus Guide, Ken Schwaber c.s. are challenged to include change management, and transition of the Integrated Increment within the organization.