Whereas Scrum is single team oriented, Large Scale Scrum (LeSS) literally scales up the activities in Scrum, applying them at the team-of-teams level. For example ‘large-scale planning’ is done by delegating one or two members from each team to this higher-level team. Retrospectives and Scrum-of-scrum problem solving is done in the same way. Beyond the teams LeSS adds open space, town hall meetings and other coordination and communication activities.

LeSS creators Craig Larman and Bass Vodde are no advocate of scaling agile. Their primary rule is: don’t do it! However, if you’re currently facing problems with:

Rather than asking, “How can we do agile at scale in our big complex organization?” a different and deeper question is, “How can we have the same simple structure that Scrum offers for the organization, and be agile at scale rather than do agile?” This profound insight is at the heart of LeSS (Large-Scale Scrum).  LeSS is defined by minimalism and minimal process, i.e. use as little process as possible to get multiple Scrum teams to work well.  Basically, LeSS is a clarification of how Scrum is intended to work. 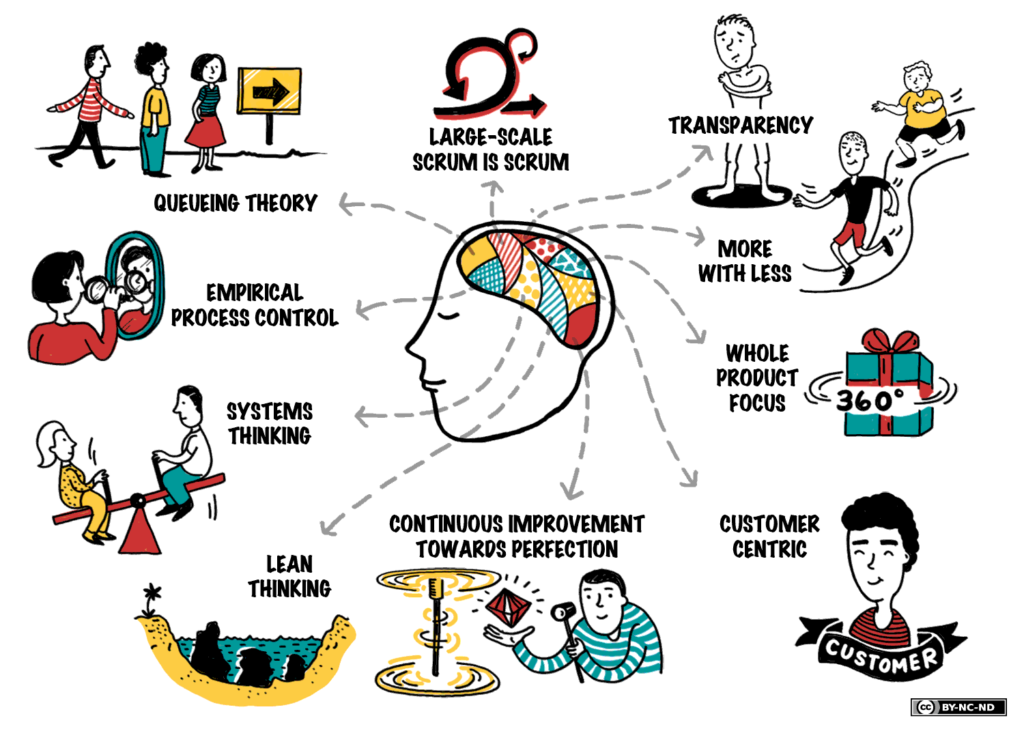 At its core, it’s Scrum with a Scrum master, Development team and Product owner. As stable team it grows into a Feature team. As other agile methods, LeSS is based on Lean thinking and systems thinking. Get rid of waste, improve continuously. What you do and with whom does matter, because of inter-dependencies, team building and a 360 degrees focus on a whole product with customer-centricity.

LeSS organizations tend to follow a simple structure. Work is organized around teams, and mismatch of skills triggers learning and coordination within existing teams. Feature teams scale nicely, but when their number goes above 8 teams additional structure is needed. Requirement areas provide this structure and complement the concepts behind feature teams. A requirement area is a categorization of the requirements, managed by an Area Product Owner, leading to different views of the Product Backlog.

Attention is given to architecture and design, technical excellence, and continuous integration to add value to Scrum.

Case studies are published on the LeSS website, ranging from Agfa Healthcare, BMW Group to Nokia, Port of Rotterdam and UBS.

LeSS is more, or More with LeSS

The formal LeSS Rules for 2-8 teams fit on the front and back of a page; the version for product teams of up to 1,000 people, LeSS Huge, is not much larger. LeSS has been around for a decade now. Bas Vodde and Craig Larman wrote two initial books on LeSS based on first-hands experiences with clients adopting the approach, and are to publish a third one this month:

Well, why read three books, if you can avoid the first two and only read the last, hopefully most mature one? What to expect? The book is organized into four major sections:

Craig Larman is a management and product development consultant in enterprise-level adoption and use of lean development, agile principles and practices, and large-scale Scrum in large, multisite, and offshore development. He is chief scientist at Valtech, an international consulting and offshore outsourcing company. His books include the best-sellers Agile & Iterative Development: A Manager’s Guide (Addison-Wesley, 2004) and Applying UML and Patterns, Third Edition (Prentice Hall, 2005).

Bas Vodde works as an independent product-development consultant at Odd-e and large-scale Scrum coach. For several years he led the agile and Scrum enterprise-wide adoption initiative at Nokia Networks. He is passionate about improving product development, an avid student of organizational, team management, and product development research, and remains an active developer.

In this 2 days conference in De Rode Hoed, Amsterdam there are experiments and experiments teams and communities, LeSS booths, fellow practitioners. You can Join the LeSS founders for two days of sharing and learning about Scrum at scale. All about the event programme and tickets (which are sold for only €250) can be found online.