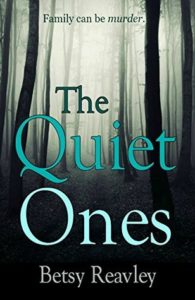 The Quiet One‘s prelude tricks the reader. You’re seeing a burning house through the eyes of a serial killer or pyromania addict. Jumping into the main story line you’ll follow Josephine (Josie), apparently happily married to Charlie. He’s older, has a job, seems to take care of his responsibilities. Josie is fine with her sex life, the chances to smoke joints, drink alcohol, and suppress the dark years of her youth, in which her foster dad abused her. Protagonists change every now and then, which leads you to think that it may be Charlie or another man who killed Josie’s foster parents, breaks into the house of Josie’s natural mother, and may be out for Josie as next victim.

I will not spoil the story line any further or reveal its end. Discover that for yourself. Betsy Reavley keeps her characters rather flat, true to the book title. There’s not that much you learn from Charlie. Even Josie’s personality, who’s facing a writer’s block, isn’t richly painted. Some episodes are condensed, details of rounds of sexual intercourse are given. Other chapters have weeks of silence in between. Nevertheless the plot is engaging, the psychological insight of Reavley remarkable, given the book’s ending and explanation in the afterword. A dark psychological, mystery thriller.

Betsy Freeman Reavley is the author of Beneath the Watery Moon and A Worm in the Bottle. Carrion, her latest psychological thriller will be released in November 2014. She was born in Hammersmith, London.  As a child she moved around frequently with her family, spending time in London, Provence, Tuscany, Gloucestershire and Cambridgeshire.  She showed a flair for literature and writing from a young age and had a particular interest in poetry, of which she was a prolific consumer and producer.
In her early twenties she moved to Oxford, where she would eventually meet her husband. During her time in Oxford her interests turned from poetry to novels and she began to develop her own unique style of psychological thriller.  Beneath the Watery Moon is Betsy Reavley’s beautifully written first release and tells the macabre story of a young woman battling against mental illness. Betsy Reavley’s second novel Carrion is a psychological chiller that address the link between grief and mental illness. Reavley says “I think people are at their most fascinating when they are faced with life’s real horrors.” Betsy Reavley currently lives in North London, with her husband 2 children, dog, cat and chickens.