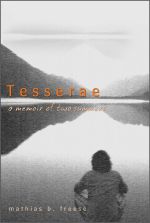 In 2015 I reviewed I Truly Lament: Working Through the Holocaust. Mathias B. Freese‘s latest title, the memoir Tesserae: A Memoir of Two Summers, discloses the memories since the author’s birth in 1940 up to 2015 with a focus on 2 life-changing summers in Woodstock. 1968 and 1969 were pivotal in entering adulthood. As retired psychotherapist Freese uses both a therapist, himself, his son and a wife as alternating protagonists in this novel. “What I knew of my limited world was hand fed to me in pieces, tessera, haphazardly at that, and I had no inner apparatus to understand my feelings or sense of it.” Tessara should be plural here, as much as homo sapien had to be homo sapiens. So far my editorial comments on the use of Latin. The author uses words to feed his readers bit by bit, sometimes repeating himself, jumping back and forth in time, to make sense of his own life. He uses films, books, important events in history ranging from the Korean War and the first landing on the Moon, to frame his coming of age.

His Jewish roots versus Christian culture makes him whisper Amazing Grace. His repressive and sexual agnostic youth was countered by the discovery of naked Big Beautiful Woman and failing relationships with merely ordinary specimens. Woodstock for him is Time itself. Now in his seventies, Freese has a compelling gravity to look back to the past, to remember, relive and transfer to e.g. his son Jordan. But life is larger than words, the author’s more than the personality he described in Tesserae. Life’s struggles, adversaries, and miseries offers material for a novel like this on time-beings. Well done!

Mathias B. Freese is a writer, teacher and psychotherapist.  His recent collection of essays, This Möbius Strip of Ifs, was the winner of the National Indie Excellence Book Award of 2012 in general non-fiction and a 2012 Global Ebook Award finalist. His I Truly Lament: Working Through the Holocaust was the winner of the 2015 Beverly Hills Book Awards, Reader’s Favorite Book Award, Finalist of the Indie Excellence Book Awards, and finalist at The Paris Book Festival and the Amsterdam Book Festival.

The author provided me a free review copy.